Xiaomi, the Chinese smartphone giant - which is well-known for producing affordable devices with decent specifications - could release an update to its Redmi line of phones soon. Some information about the upcoming Xiaomi Redmi 5 has been leaked in what appear to be the company's official presentation slides. 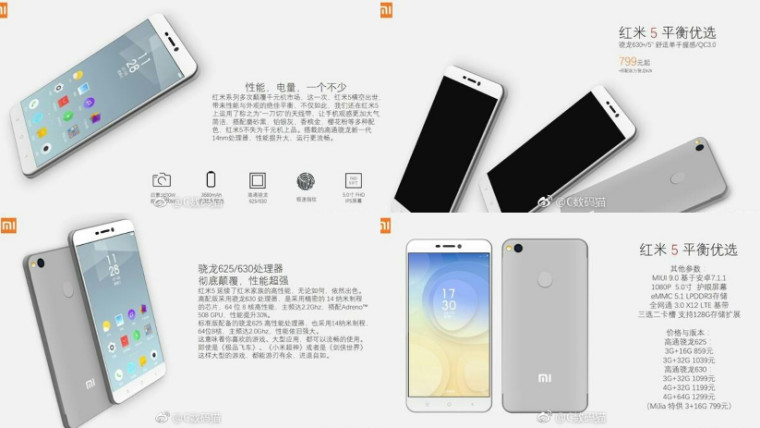 Expected to launch at a starting retail price of just $125, the Redmi 5 is shown to be offered in two variants; powered by a Snapdragon 625 and a 630 SoC. The phone with the lower-end processor from Qualcomm will come with 3GB of RAM, while the higher-end model will feature 4GB of RAM. Both variants offer 32GB and 64GB storage configurations.

The Xiaomi Redmi 5 will come with a 5-inch full HD display, and a massive 3,680mAh battery with Quick Charge 3.0. According to the leak, the device will run Android 7.1.1 Nougat with the MIUI 9 overlay. It will also come with a 16MP rear camera, and a 5MP front-facing one. For expandability in terms of storage, you're getting a microSD slot, however, it does not state the maximum capacity supported.

Pricing, as noted earlier, will start at $125 for the lower tier model, and move up to $190 for the highest-end variant. Although no release date is mentioned, Xiaomi is expected to unveil the MIUI 9 overlay next month and could announce the new device during the keynote.