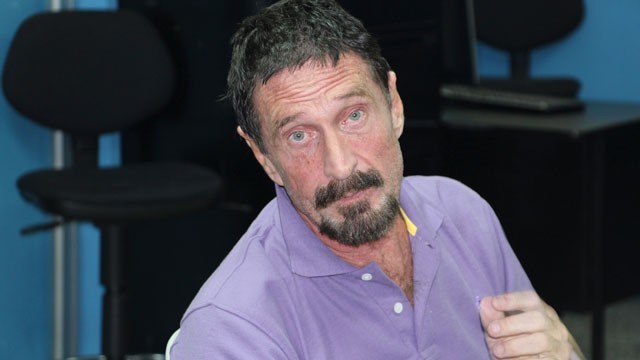 Do you remember when we first mentioned that John McAfee’s life sounded more like a movie than reality? The man moved to Belize, was accused of manufacturing drugs (penicillin, apparently), found his neighbor dead, is wanted for “questioning” in that murder, was allegedly arrested at the Mexico/Belize border, only to find out that it wasn’t him but was instead his body double delaying the authorities so he could escape, really escaped to Guatemala, held a press conference, was arrested for illegally entering Guatemala, allegedly had a heart attack while incarcerated in Guatemala, and then wanted to return to the United States. Whew…

Well it looks like Impact Future Media agrees that this is better than any script Hollywood could write and have purchased the rights for the official John McAfee story, tentatively titled, “Running in the Background: The True Story of John McAfee.”  This includes the rights for not only a movie, but also film, books, and multimedia. François Garcia, CEO and Co-Founder of Impact Future Media, is excited about the opportunity.

“We are very excited about working with John McAfee, on this initiative. Mr. McAfee has entrusted us with his life story, and that is a responsibility we take very seriously. We will work tirelessly to make certain that his story is shared with the proper industry partners.”

While the press release doesn’t give any specific details on the format or even a release date, we’re not surprised to see a company swoop in to purchase the rights. The only question that remains is: Who will play John McAfee?