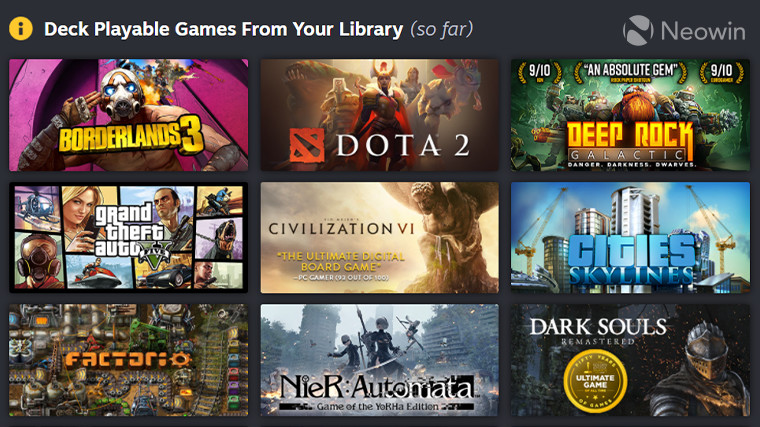 To start, head to this corner of the Steam store and login with your Steam account, which will kickstart the checking process. There are four categories your owned games can fall into: Verified, fully functional on the Steam Deck; Playable, functional games that need some extra effort to get running or play smoothly; Unsupported, games confirmed to not currently function on the Steam Deck; and Untested, titles Valve has yet to get around to test against the Linux-powered handheld.

For example, from my Steam library, 46 are Verified, 43 are Playable, 26 are Unsupported, and 615 games are yet to be tested. It's encouraging to see, at least In my case, that the Verified and Functional games sections have quite a few high-profile releases like The Witcher 3, GTA V, Borderlands 3, Skyrim, Rocket League, Sekiro, Dark Souls trilogy, Horizon Zero Dawn, Yakuza games, Civilization VI, Nier Automata, Fallout 4, Factorio, and many others.

Though a couple of big hits like Halo: The Master Chief Collection and Rainbow Six Siege are present in the Unsupported section — due to unsupported anti-cheat — VR games seem to be the ones weighing down this portion the most on my end. Which is to be expected as the Deck officially does not support VR games.

"While we've been ramping up and testing more titles than ever before, we want to remind everyone that this process is ongoing: we're testing new titles constantly and are going to continue past launch," Valve says in today's blog post. "Just because we haven't tested a game yet doesn't mean it doesn't work well on Deck already."

The Steam Deck launches on February 25, with the first wave of purchase links heading out to $5 reservation holders at 10AM PST. The first shipments will be going out on February 28.