The "Me Too" movement against sexual harassment and assault began in October 2017 and gained momentum via the #MeToo hashtag on Twitter shortly after the Harvey Weinstein scandal. The movement was endorsed by numerous high-profile celebrities and activists, and soon became the voice for victims of sexual harassment all over the globe.

Now, Google has announced a website called "Me Too Rising", aiding people in visualizing the spread of #MeToo and to further understand its global impact. 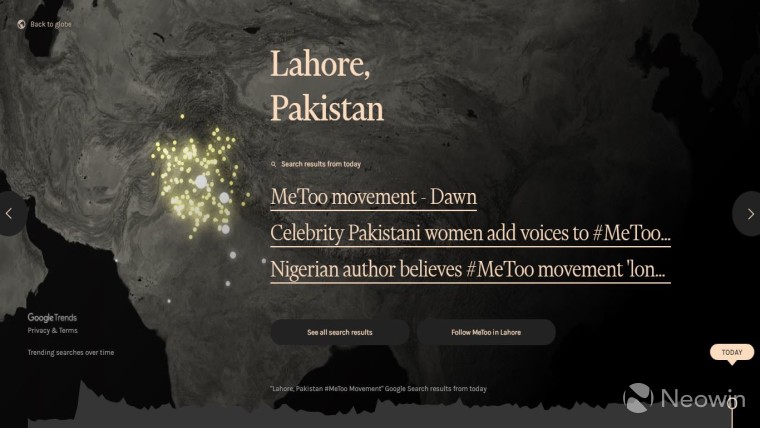 The dedicated website shows an animation indicating the rising awareness regarding the #MeToo movement. This is then followed by an interactive model of the Earth which users can rotate to see popular search results regarding #MeToo in different countries and their respective cities.

All of this information has been compiled using data from Google Trends. Statistics indicate that the term "#MeToo" was searched in all 195 countries on earth. Google says that:

Me Too Rising shows what it looks like when we all become a little more aware of sexual assault and violence. When enough survivors speak up, the world not only listens; it searches for answers.

The website also includes sexual assault resources for those who seek to learn more regarding the matter or require help. Google further states that in order to support sexual assault victims, it will be providing $500,000 in grants to the Rape, Abuse & Incest National Network (RAINN) and Girls for Gender Equity. You can check out the Me Too Rising website here.