YouTube announced Wednesday that it is launching a new feature that allows users to easily blur out faces in videos, protecting the identities of the recorded subjects. According to the blog post announcement, human rights concerns for people depicted in activist footage was a major motivator for the new feature.

YouTube may be the first video sharing websites to offer such a feature. According to WITNESS' 2011 Cameras Everywhere Report, "No video-sharing site or hardware manufacturer currently offers users the option to blur faces or protect identity." 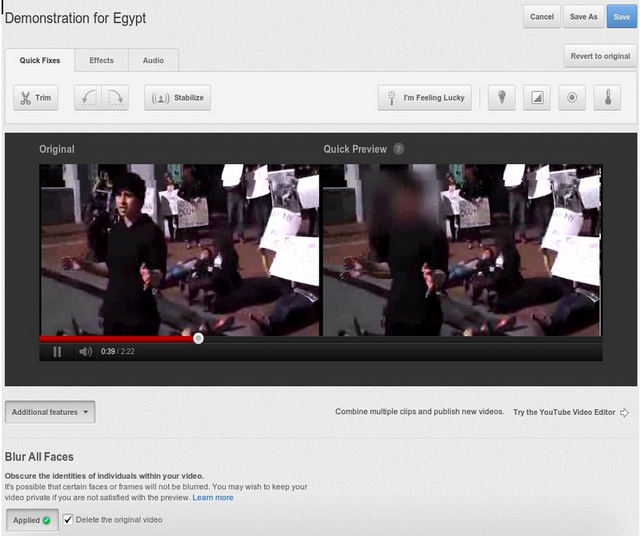 The feature is a little primitive at the moment. Under "Additional Features" in the Video Enhancements tool, simply click the "Apply" button for the Blur All Faces option. A preview of the modified video will be shown. The feature, at least for now, will automatically blur out all detected faces in the video. The blog post warns that the technology might miss certain faces or frames, and recommends that users keep their videos private if the blurring is not satisfactory. No mention was made of whether the feature will be expanded in the future to allow selective or manual facial blurring.

The feature will be available to all users by the end of Wednesday.