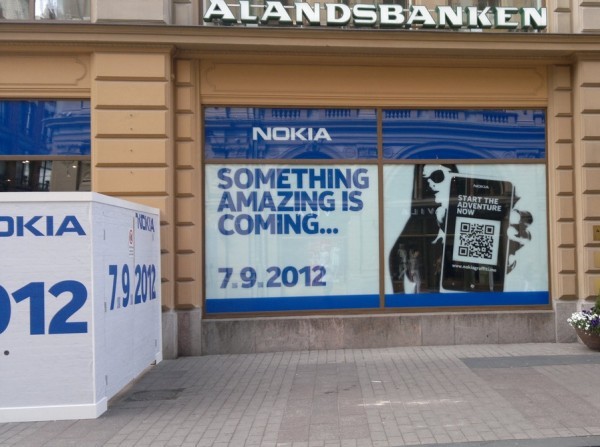 Nokia is, of course, huge in its home country of Finland. The company also has its own retail store in Helsinki. This week, that store shut down for some renovations and won't reopen for over a month.

However, as noted on the My Nokia Blog fan site, the signs that have been placed around the store and on its windows claim that "something amazing is coming" with the date of September 7th attached to it (Europeans put the day, and then the month, for date announcements; US residents put the month first, and then the day).

The date is significant in that it also happens to be the day after the annual Nokia World event in Helsinki, which will be held on September 5th and 6th. Nokia has previously announced that this year's event will be smaller in scope than 2011's Nokia World, which was held in London.

It's more than likely that Nokia will reveal a lot of new products, including its Windows Phone 8-based smartphones, at Nokia World. There's also the possibility that it will launch a Windows 8-based tablet device.

Nokia has also launched a new website to promote the upcoming Helsinki store relaunch. It contains a feature that lets you upload a photo of yourself and have that photo get hit with some official Nokia “graffiti."