YouTube is a video sharing website which publishes content for people of all ages - material which can some times be suggestively explicit, hence unsuitable for viewership by minors. In an effort to solve this acute problem, the Google-owned subsidiary is launching an Android app exclusively for children next week. 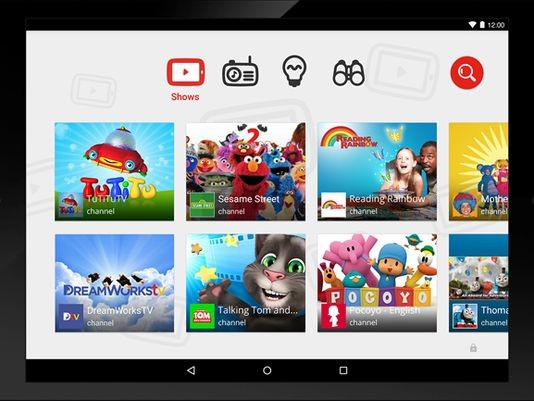 The new application is named 'YouTube Kids', a demo of the home screen of the app revealed eight large tiles showcasing children-friendly programs and channels such as Sesame Street and DreamWorks TV. There are five controls on the top of the simple interface which include:

There will also be various restrictions imposed on the application ensuring that a child isn't surfing age-inappropriate videos through the app. The functionality of the 'search' feature will be restricted, for example if someone types 'sex', a screen will pop up requesting the user to 'Try something else'. Parents can also impose a time restriction and a password on the app; the app's settings can be modified so it automatically closes after a set period of time, when this happens, a password will be required to open the app again.

The images are big as are the tap targets for small fingers, and since most younger children can't type they can search with voice.

Ben-Yair also explained how the demand for family entertainment channels is drastically increasing, noting that:

Parents were constantly asking us, can you make YouTube a better place for our kids, (year over year) we've seen 50% growth in viewing time on YouTube, but for our family entertainment channels, it's more like 200%.

The app is slated for a February 23 release and will be available for Android devices only initially.