YouTube have launched their new U.S. Elections 2012 hub under the 'politics' username, posting various videos of national election coverage from now until election day in November. The hub will be a library of material from various U.S. broadcasters including ABC News, New York Times and the Wall Street Journal.

Users of the hub are able to look at 'what's on now' as well as highlights from the past few days towards the bottom of the page. For those wanting video content from their 'preferred' news sources, users can click on the logos at the top to filter the specific videos coming only from that news source. YouTube have also helpfully placed a timeline of key dates in the run up to the elections in November at the bottom of the hub, for those needing a little reminder. 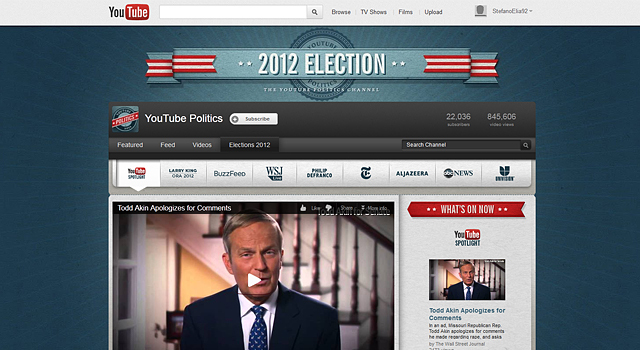 Google also seem keen to emphasise the use of their Google+ hangout service, which will be involved with the streaming live broadcasts of party conventions later this month and the presidential/vice-presidential debates coming in October.

For the politically active, some may remember YouTube's previous politics hub that was designed to keep up with the modern day web surfer's political interest. Now it appears Google have re-launched their service, more orientated towards the upcoming election. The move comes as YouTube's latest attempt to put politics into the front seat of the tech-oriented generation. The fact that both Barack Obama and Mitt Romney's campaign teams have uploaded more than 600 videos each since May 2011, showcases their belief that campaigning online is worth the time and money, to attract the younger voters.

YouTube have rather characteristically, created a video to launch their new hub of election material, including a title at the end that boasts online coverage of party conventions beginning August 27th.

Are you a political junky? Will you be using YouTube's elections hub to keep up with the latest debates in the run up to the U.S. elections in November? Let us know by posting in the comments section below.