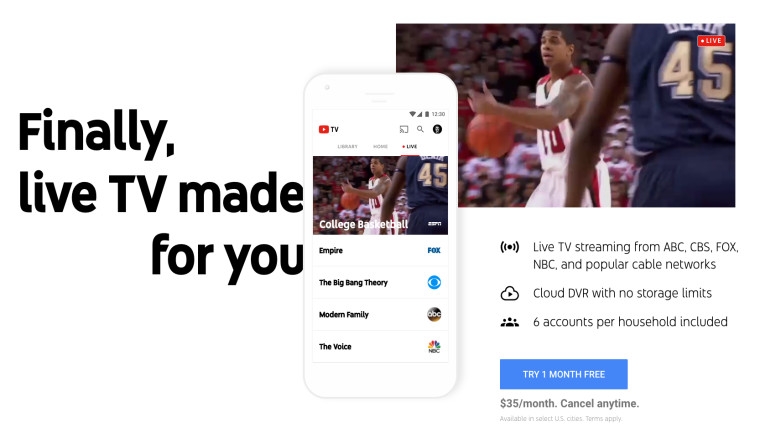 YouTube TV, YouTube’s live on-demand streaming service, has been available on smart TVs and Xbox consoles for $35 a month. The service was slated to launch on more platforms, including on Apple TV, according to the company’s announcement of the availability of the Xbox app back in October of 2017. However, nearly a year after the service was revealed, YouTube TV announced via its Twitter account that the service is now available on Apple TV and Roku.

And there it is! We are happy to announce you can now use YouTube TV on @AppleTV. ?

According to its supported devices page, the 4th generation Apple TV, Apple TV 4K and all Roku TV devices will be supported by the YouTube TV app.

YouTube TV offers its subscribers access to more than 40 TV networks in the U.S., including ABC, CBS, NBC, ESPN, FOX and many more, along with unlimited cloud DVR storage. The service also extended to 34 additional markets in the U.S. at the end of 2017. Not surprisingly, YouTube TV is absent on any of Amazon’s streaming devices. The companies have recently been at loggerheads, with Google pulling YouTube off the Fire TV and the Echo Show.

In case you are still on the fence about your choice of streaming service, we made a handy guide detailing the pros and cons of all major streaming services that should make it easier for you to choose your pick.