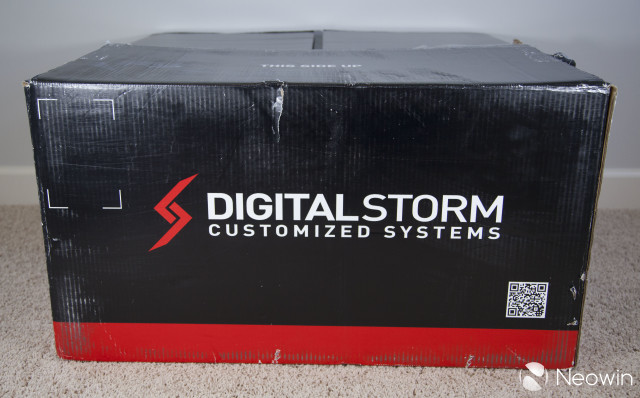 People love their PC gaming, and while many gamers like to build their own rigs, many others like to put down some money and buy a fully assembled device capable of rocking high framerates on their favorite games. One company, Digital Storm, promises to provide gamers with any type of gaming PC they want. With machines starting at $699 and topping out at nearly $9,000, there's a gaming machine available for everyone. Digital Storm sent me their top-of-the-line Vanquish II rig to test out, so I ran it through the paces to see how well it stacks up with other options on the market.

The Digital Storm Vanquish II is shipped to your home fully assembled and in a pretty big box. When it was delivered, my wife called me to complain that it was blocking the entire front door and that she had to pull it inside by herself. 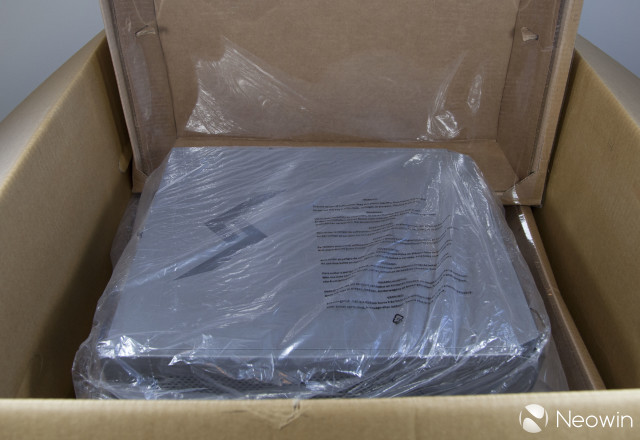 The machine is packed extremely well. The case is suspended in the box by a plastic cushion supported by cardboard. I would've thought that the computer would've torn the plastic, but these guys ship lots of computers out so they obviously know what they're doing. 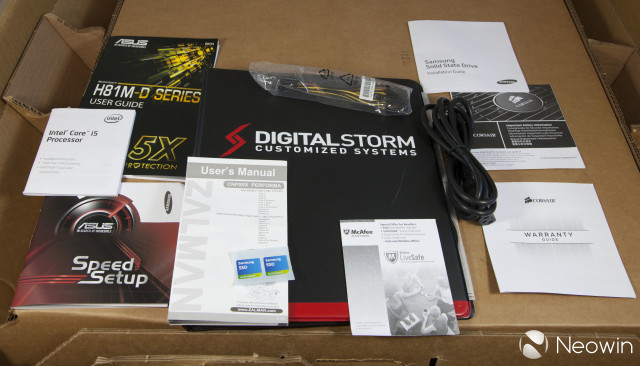 There isn't much else inside the box. Aside from the packing material and the computer itself, the only thing left was a small box that contained manuals, a power splitter for a different GPU, the power cord, and a nicely presented 3-ring binder. This binder contains a "Certificate of Ownership," signed by everyone who helped assemble and test your new computer, a parts list, and a quick description of troubleshooting steps if you have issues with the initial boot. It also has the results of the testing phase, setup instructions, and the warranty information. The binder closes out with your Windows 8.1 DVD, and drivers for the SSD, motherboard, and GPU.

Before connecting the PC, it's important to note that the graphics card is held in place during shipping via expanding foam packing material. Before plugging the machine in, you have to open the case and pull that material out.

The Vanquish II comes nicely spec'd with Intel's latest i5 4590 Quad Core CPU, 8 gigs of RAM, and a GeForce GTX 770 with 2GB of RAM. It also comes pre-installed with Windows 8.1.

The MSRP listed in the table above is the cost of each component from Newegg. Excluding some minor pieces like the Zalman CPU fan, various SATA cables and such, the total to buy the parts yourself comes to $1,216. Digital Storm sells the Vanquish II fully assembled, with a 3-year warranty and life-time tech support for $1,259, so it's clear that they're buying parts at wholesale prices.

It's important to note that this is a review for the "Level 4" version of the Vanquish II. Cheaper, less capable models are also available for those on more of a budget or if you want to upgrade yourself down the road but want the base model now.

The Vanquish II looks fine in the Corsair Graphite Series case, but won't be winning any awards for being sleek and modern looking. 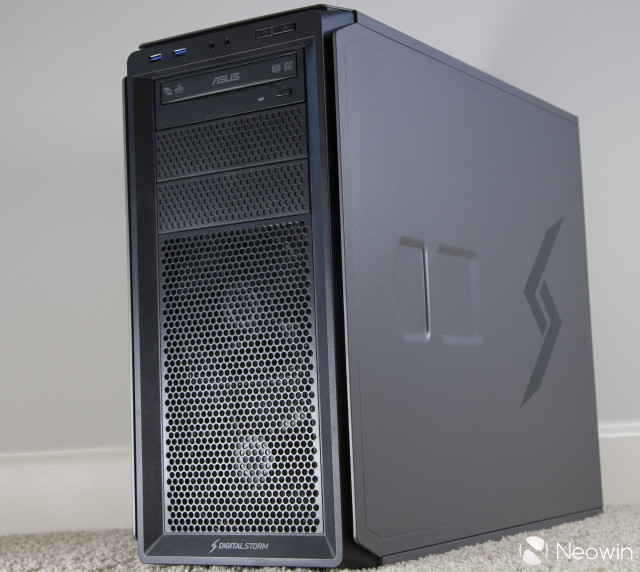 The "Digital Storm" name is prominently displayed on the front of the case, and the logo is embossed on one side. On the other side, a half-glass panel lets you see the video card, CPU cooler, and power supply, but there are no fancy LED lights inside the case. This is something you could probably add pretty easily yourself after the fact if you were interested in doing so. 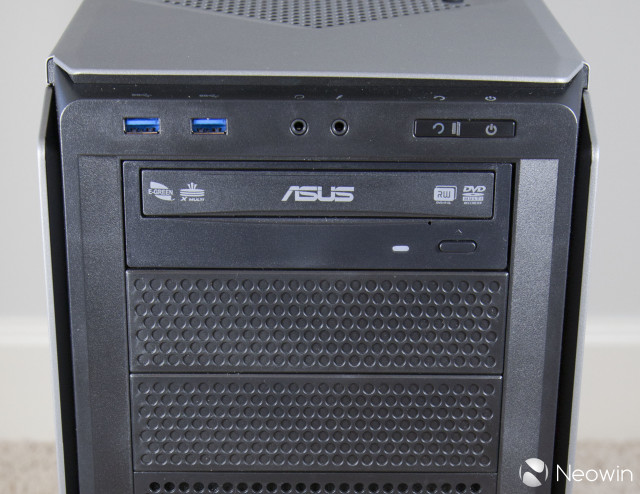 The front of the case has two USB 3.0 ports, audio and microphone jacks, and the power/reset buttons. There's an Asus DVD-RW drive and two extra 5.25" drive bays for future expansion. Two blue LED fans suck cold air into the the case to keep things cool. 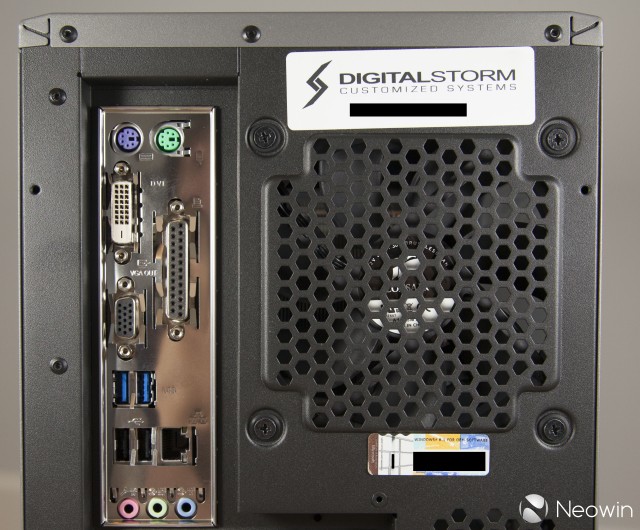 The Asus H81M-D/E Plus motherboard has some legacy ports that are hard to find nowadays, including two PS/2 ports, a serial port, and a parallel port. It also has on-board DVI and audio, two USB 3.0 ports, two USB 2.0 ports, and a single Gigabit Ethernet port. 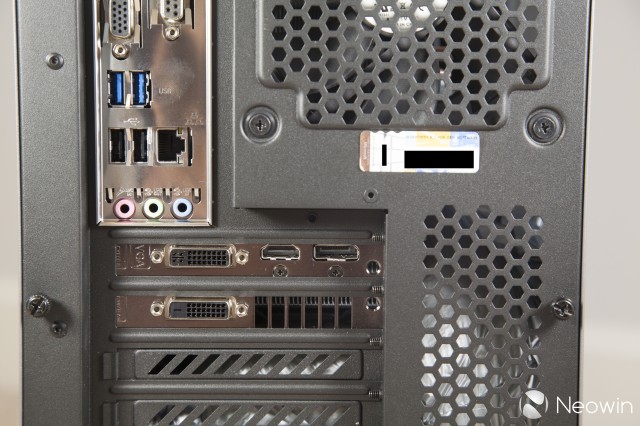 The GeForce GTX 770 video card has dual DVI, a single HDMI, and a single DisplayPort connection to power pretty much any setup you may have. 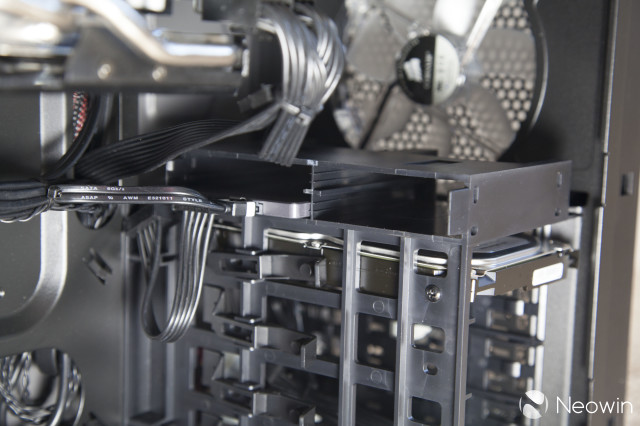 From a storage perspective, the Vanquish II comes equipped with a 120GB Samsung 840 EVO SSD drive and a 1TB Seagate 7200 RPM drive. While the SSD is a little small, it's clear that games are meant to be installed on the 1TB drive while the SSD is reserved for quick boot times and fast operating system performance.

The Vanquish II is a very quiet box. The design decision of having a large case with a small amount of components inside, as well as an open grate at the top, means you don't need many fans to keep the system cool -- and less fans equals less noise.

In a room with the gaming PC off, I registered a volume of 35dB.  After turning the machine on and putting my phone (running the Smart Tools sound meter) roughly three feet away from the front fans, I registered a volume of 45dB. Putting the phone right next to the fans only increased the volume to 60dB. The Vanquish II is extremely quiet, and once you start playing games on it you'll barely be able to hear it.

A gaming PC can look awesome and have all of the latest connections and ports, but what really matters is how the thing performs.

Very barebones install - and I installed Steam myself!

The first thing to note about the Vanquish II is that when you first boot into Windows 8.1, there isn't a piece of bloatware to be found. The company is obviously catering towards the tech crowd, so they knew that would be a kiss of death. Instead you're greeted with nothing more than the barebones operating system, ready to install Steam or individual games as you see fit. 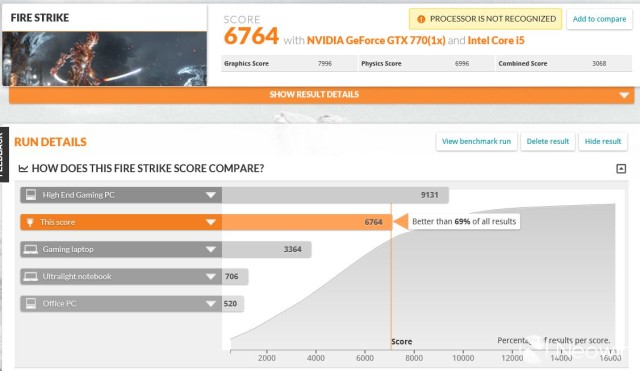 Before playing any games, I ran the system through a series of 3DMark and PCMark benchmarks. The system easily demolished the Ice Storm and Cloud Gate tests, receiving scores of 147,971 and 16,207 respectively. The Fire Strike test, used for high-end gaming, also did well, scoring a respectable 6,764. For comparison, when I reviewed the Club3D AMD Radeon R9 270 with an older i7 CPU and 12 gigabytes of RAM, I scored 4,903. According to 3DMark, the Vanquish II scored better than 69% of all other test results.

Running the PCMark benchmarks provided expected results: The "home" test gave a result of 3,783, nearly double the results of the HP EliteBook Folio G1. There's no question that this machine is excellent at running web browsing, video playback, and the like.

Next up, I tested Ubisoft's first person shooter, Far Cry 3. I cranked the resolution up to 1920x1200 and the quality up to "Ultra," then began stalking prey on the tropical island. While moving throughout the wilderness I was getting framerates in the high 70s. During heavy firefights with the locals, including watching the jungle burn down from some well placed molotov cocktails, the framerates only dropped to the mid-60s, making battles silky smooth. According to FRAPS, I never had framerates drop less than 50, and the average for the hour I played was 63.5.

The other game I ran through the paces was the latest version of Tomb Raider. Setting the graphics quality to "High" resulted in a steady 60 FPS without any fluctuation at all no matter what was happening in the game. When setting the quality to "Ultra," I still usually saw 60 FPS most of the time, but it occasionally dropped to 45 FPS, especially in action scenes with rain. Changing the setting to "Ultimate" still provided 60 in most cases, but it frequently dropped down to 40 in the rain and 35 with action in the rain.

One of the CDs that comes with the Digital Storm Vanquish II is the Asus "Driver & CPU Tweak" disk. While I don't have much experience with overclocking, I decided to give this a go to see what I could do to improve the already good performance of the box. 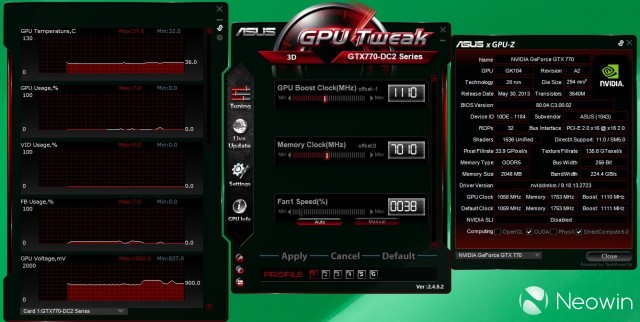 There's a lot of detail here - click for a larger version

Installing the software is straightforward and requires a reboot of the system. Once done, you're presented with the GPU Tweak interface that lets you modify both the GPU and Memory clock speeds, as well as the fan speed to help keep everything cooler. A graph shows the vital stats from the system, including the GPU temperature, usage, and voltage.

As I mentioned previously, I have little experience with overclocking, so the first thing I tried was to crank both the GPU and Memory clock speeds all the way to the top. If it's an option, it must be ok, right? After applying the changes, everything seemed to be fine so I proceeded to load up Tomb Raider again. Before I even got to the main menu, the graphics on the screen went crazy on my main display, and little pink icons were displayed in a pattern on my secondary screen. The machine locked up, forcing me to hard power cycle it. Whoops. 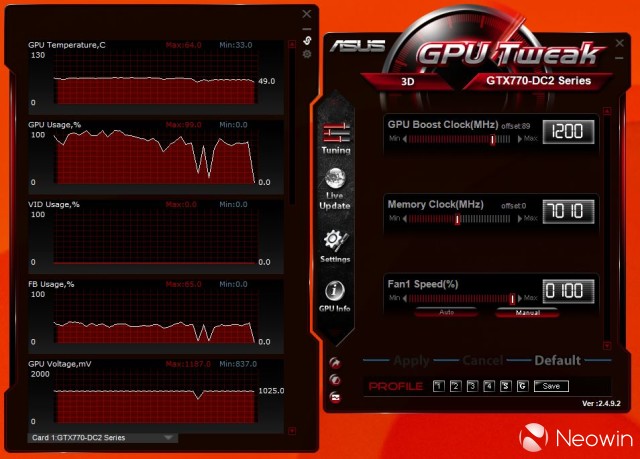 My next attempt was to crank the GPU up by roughly 10%, but to leave the memory alone. Tomb Raider loaded up fine, so I put the graphics settings up to Ultimate and began playing for awhile. There were no issues, and I found that my framerates were in the high 40s during the same scenes I was seeing 35-40 in before. I didn't do much other tweaking because I didn't want to potentially damage the hardware, but it seems pretty straight forward to get a little more "ooomph" out of the Vanquish II with just a little extra effort.

The Digital Storm Vanquish II has a lot of things going for it. When I first received the box, I assumed that I'd be able to build the same machine for much cheaper, but that turned out to be completely inaccurate. Sure, there's a slight premium on the device, but based on Newegg prices, you're only spending roughly $50 more to have everything installed, wired up neatly, tested, and sent to your door, ready to install Steam the second you power it up. Add in the warranty and tech support, and you're getting an awful lot for that $50. 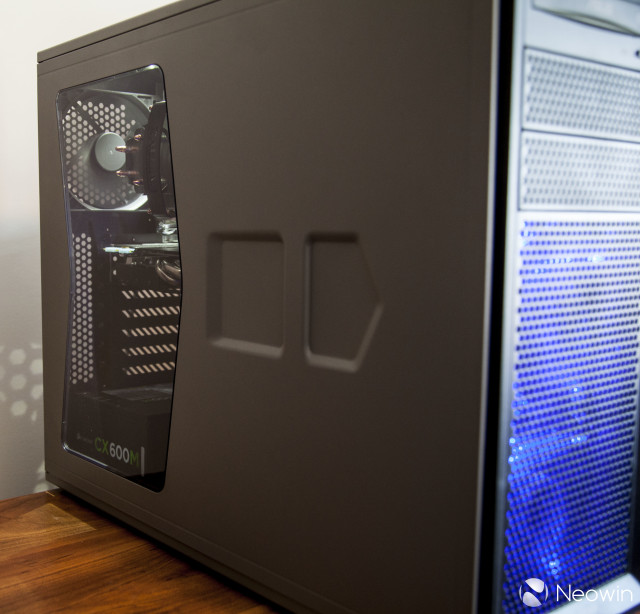 When it comes to playing games, the Vanquish II does a very good job for the price point. I would've liked to have seen a bump up to 16GB of RAM, but you don't generally need that much with games, and if that's important, you can always replace the RAM yourself in the future. That's one of the big things this box has going for it: There are no proprietary components like some vendors, meaning you can field replace anything you want from the video card to the RAM to the CPU or even the motherboard.

The motherboard is the main detraction from the Vanquish II. While it does the job adequately enough, the fact it only has a single extra PCIe slot means that there isn't a lot of room for expansion, and running two video cards is definitely out of the question. In addition, having only one gigabit Ethernet port while providing a parallel port on the back seems a little outdated to me. However, you can always upgrade the mainboard yourself down the road with a minimal amount of effort.

Overall, the Vanquish II makes a great selection for someone who wants a new gaming rig but doesn't want to spend the time building it out themselves. The price is in-line with what you'd pay to do it yourself, so unless building the machine is part of the enjoyment for you, I'd highly recommend putting this gaming PC on your shopping list.