After I saw the mesmerizing reverse slow-motion trailer for Dead Island I knew that I wanted to give the zombie action/adventure game some of my attention. I hoped that this would be a zombie game to remember; better than last year’s Dead Rising 2 which I didn’t fully enjoy. Unfortunately as I played through the game I couldn’t help but feel a little bit disappointed as to how the game had come together. 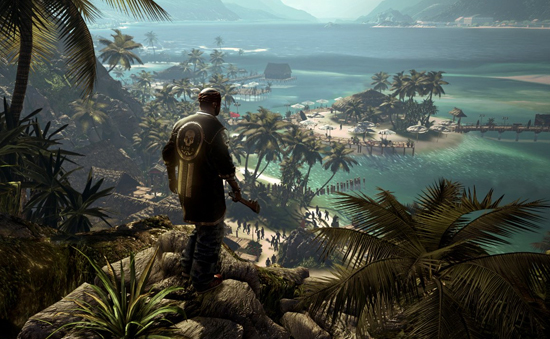 The premise of Dead Island is that you and your group of cohorts are immune to a zombie virus outbreak that has ravaged the pacific holiday island of Banoi, and you need to help get off the island as quickly as possible while helping the few remaining survivors. As you go along, you run into loads of zombies that naturally try and bite your head off and you smash them to pieces with a variety of weapons.

Story-wise a lot of the things that occur in Dead Island seem to be an excuse to move from place to place and kill zombies along the way. There are twists and turns plus a variety of characters make their appearances, but it’s definitely not a stellar or particularly memorable plot - it’s best to focus on the killing, the weapons and the gore. 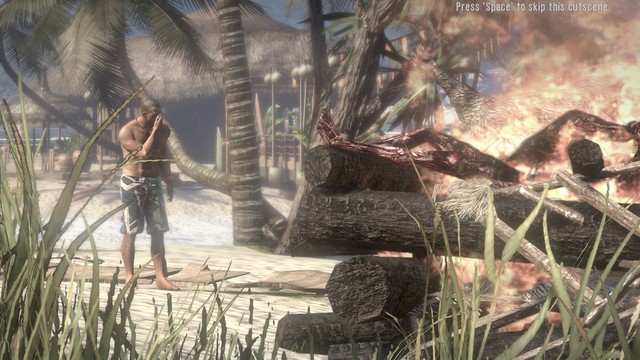 Initially you must choose a character that has a particular weapon specialty. I played a bit with each of the characters and it doesn’t seem to play that much of a part in the overall game. Having four characters is designed for co-op, but that doesn’t mean that you can’t play single player (which is what I did mostly), and none of the characters have particularly great backgrounds or voice acting for that matter.

There was a particular oddity I picked up on as I progressed through the game as a lone solider, that is, without the available 4-player co-op: while actually gaming there is no sight of the other three members of your group, however they magically appear in the important cutscenes. Presumably this is due to the cutscenes being pre-rendered but it feels extremely out of place.

You move through four acts for a total of 18 chapters, and each act has a different location to accompany it. The most visually stunning and my favorite of them is the first “Resort” destination, which is laden with beautiful beaches, pools, palm trees and a nice island feel to it. The others weren’t as good (second best was the jungle), and at times I wished that more of the game’s events could have been located at the resort. 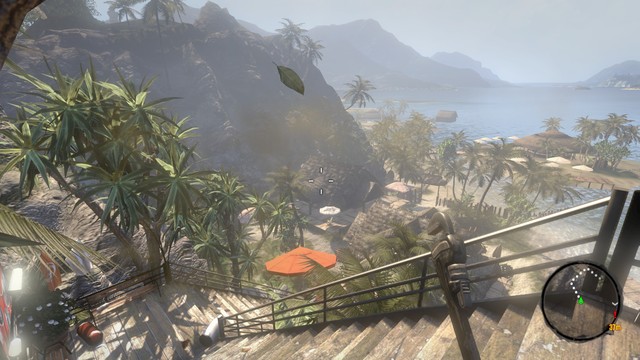 The game is quest based, with a main quest that needs to be completed along with side quests that you can attempt if you wish to extend your time on Banoi. As with a lot of quest-based games, the sidequests can feel derivative as you have to go and deliver this, kill these zombies, save such-and-such; I started off doing all sidequests I encountered but eventually gave up for this very reason.

When you’re not completing a quest you are free to roam the open-ended sandbox-style island and explore all it has to offer. Thanks to cars and quick travel maps you can reach places a lot more quickly as the areas on offer seem quite large, and scattered around are weapons, items and more sidequests. Free roam is something I’ve always enjoyed in a game and in Dead Island this is true, except I just wish the sidequests were a bit more exciting.

Still following the quest-based game model, there is a level system whereby each zombie killed and quest completed gives you experience (XP) that goes to your levelling up. With each level up you can unlock more abilities and gain more health to make your survival on the island that little bit easier. Choosing your upgrades can be hard, and you certainly won’t be unlocking all upgrades by the games end: I reached level 31 by the end and I didn’t even perform a third of the upgrades. 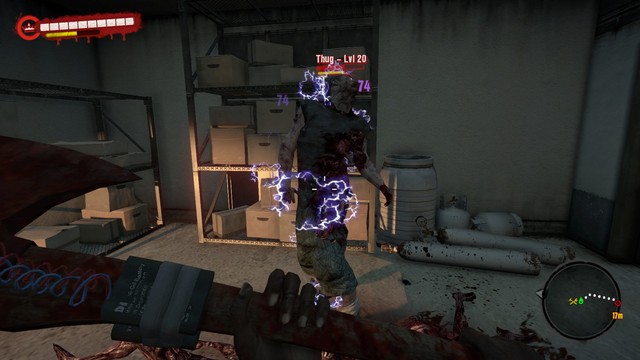 Then there are the weapons, and there are lots of them spread throughout the island and given away as quest rewards. Similar to the way Borderlands had a color-coded weapon system, Dead Island uses colors to indicate the rarity (I believe) of the weapons that you have. You can use loads of things to attack zombies with, ranging from your sturdy pipe and shovel right up to spiked bats, maces and katanas. Close-range weapons eventually break from bashing in too many zombie skulls and need repairing (at a cost); they also can be upgraded if you desire, and created from the random parts you find lying around.

The sheer number of weapons is one of the best parts of Dead Island. I preferred to use sharp weapons but it’s still awfully satisfying to see a zombies head fly off from a sledgehammer hit. You can also use guns, which come into the game at a later stage, although this style combat just doesn’t feel as satisfying as good old close-range weapons.

As you would expect the combat system is pretty much hack-and-slash style. Find a zombie, repeatedly tap the attack button and hope for the best. There are no combos or exciting moves except the ability to throw your close-range weapon if you’re not close enough to attack. Surprisingly this is, for the most part, quite satisfying due to the gruesome nature of the blood and dismemberment system. 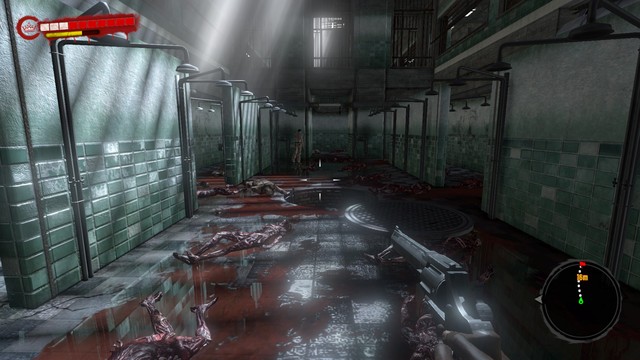 The combat system isn’t without its downsides though. You seem to never have enough stamina to pull off more than five or six hits in a row, which leads to your character being out of breath and quickly dying when there are large groups of enemies. Now you can’t actually die in Dead Island, more than pass out or something like that which requires you to wait seven seconds before you respawn – this is put in due to co-op but feels strange in singleplayer.

I eventually found the stamina system to be frustrating. You just want to keep attacking the zombies but you inevitably run out of steam, get knocked down and have to wait seven seconds before you can re-join the action. What makes it worse is that some enemies can knock you away from the action, making them hard to kill when you are playing without the assistance of others. Initially the system doesn’t seem so bad but in the harder sequences it’s very annoying.

There have been a lot of issues surrounding the fact that Techland pushed a developer version of the game, plagued with bugs, to the public on PC (one reason this review was delayed). I played through the entire game with the first patch applied and it did seem to fix a lot of the issues I heard about the game before playing it. That said, I did find some non-showstopper bugs through the game and some odd Xbox-to-PC port leftovers, but the game was for the most part completely playable. 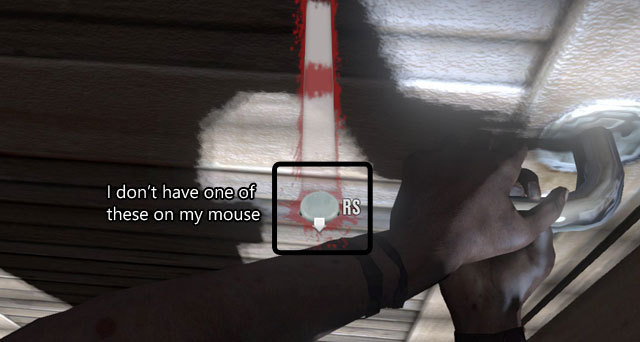 The big downside about the game being a direct port was the graphics didn’t seem as good as I had seen on other PC games of this era; even some 360 games seemed to be visually better. That said the resort and jungle environments provide some great scenery to look at and the close-range weaponry and zombie details seemed fantastic – however it wasn’t spectacular by any means.

One area I did find impressive with the game was the sound effects and zombie voicing. As far as the “realism” of a zombie voice can be, Dead Island seemed to hit the nail on the head with the screeches, drooling and all that zombie-related noise. Impact noises of weapons hitting flesh were also quite good and added to the satisfaction of dismembering zombies.

Dead Island gave me around 13 hours of gameplay, including all the main storyline quests and I estimate around half of the sidequests – which is fairly decent for this style game. I don’t think the game could have been made any longer considering the content that was available, and it could simply have gotten boring was it dragged out for any longer. I wouldn’t say the game is particularly replayable, but you might want to go through as a different character or play the entire game co-op if you played singleplayer throughout. 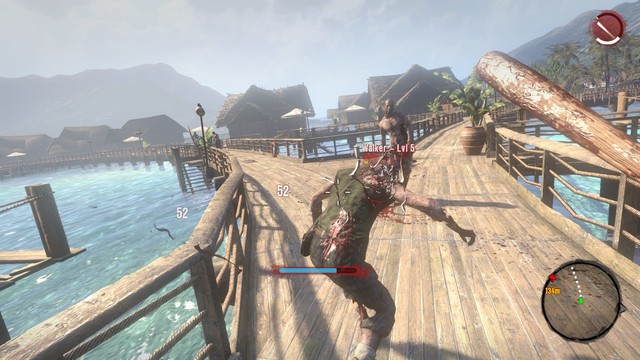 Just on the co-op experience, I tried it briefly by joining a random player mid-way through the game. The game constantly searches for people available to play with and you can join them at any moment when you feel like some multi-player action. There’s nothing particularly special about co-op except for this great way of entering it - you can have fun attacking zombies with up to three friends, do quests and all that but really not much more.

Dead Island certainly wasn’t a bad experience playing through the game, I just felt like more could have been achieved with the premise and idea behind the game. The open-ended environment, quest and level system, and weaponry selection are all fantastic parts of the game, just when placed with derivative side-quests, combat annoyances, mediocre story and the Xbox-to-PC port factor it restricts the game.

If Techland decides to make a sequel to this zombie game, I just hope they improve upon what they had and make it even more enjoyable. Fix these issues and you would have a fantastic zombie game, but as it stands we have just a “good” one.