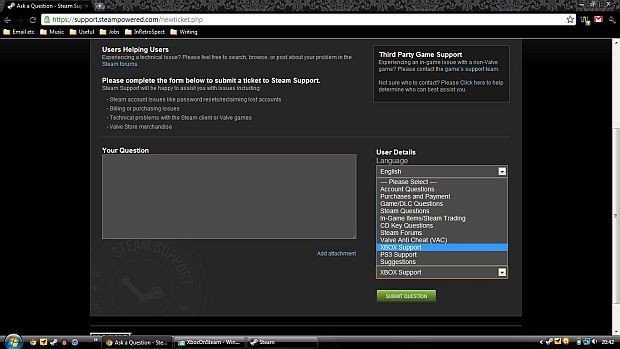 The Xbox 360 has always been much more of a closed system in terms of its online support compared to the Playstation 3 console. But is that situation going to change soon? According to a recent screenshot of Valve's Steam client, its support area now lists "XBOX Support" as one of its options. This odd addition, as first reported by The Sixth Axis web site, is fueling speculation that some kind of Steamworks support could soon find its way into Microsoft's Xbox 360 console. So far neither Microsoft nor Valve have issued any comments about this development.

Steamworks support is already available for the PS3 console. It was added as part of the launch of Valve's latest game Portal 2 to enable cross platform co-op play between the PC, Mac and PS3 consoles versions of the game. Microsoft only enables cross-platform support for its Xbox 360 console for a tiny few PC games as part of the Games For Windows Live service. Valve certainly would love to see some type of Steamworks support for Microsoft's console. In a recent interview at Eurogamer, Valve founder Gabe Newell said, "The main thing is having Microsoft get comfortable with it and let us do it." He added, "Other developers on the PS3 are starting to benefit from Sony's more open approach. Hopefully that will help Microsoft see that's a good strategy for making customers happy, that the barbarians won't tear down the walls of Xbox and turn it into some chaotic wasteland."

One of Valve's upcoming games is Counter-Strike: Global Offensive, the next game in its best selling shooter series. Valve has already announced the game will be released for the PC, PS3 and Xbox 360 platforms and would seem to be perfect for cross-platform Steamworks support.