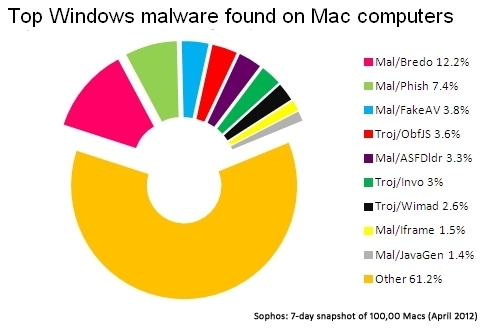 Security firm Sophos announced Tuesday that data collected from 100,000 Mac computers revealed that 20% of those computers were carrying at least one instance of malware. The catch is that the 20% figure applies to malware designed to target Windows computers, but is harmless to Mac OS X.

Sophos's blog post went into more details. The data comes from a snapshot of the millions of Mac computers that downloaded Sophos's free anti-virus software. While the Windows malware stored on Mac computers won't affect Mac OS X installations, the malware could then be transmitted to Windows over computer networks.

The data in Sophos's study showed that 2.7 percent of Macs, or 1 in 36, were infected with actual OS X malware.

Sophos says that cybercriminals view Macs as "soft targets," because Mac users are less likely to be running anti-virus software. The study indicates that Macs are seven times more likely to harbor Windows malware than Mac OS X-targeted malware, but Sophos says that isn't an excuse for inaction. Much of the Windows malware found on Mac computers could be eradicated with a simple anti-virus scan, such as the one Sophos provides. As Sophos's study shows, cleaning your computer helps not just yourself, but other computer users near you as well.