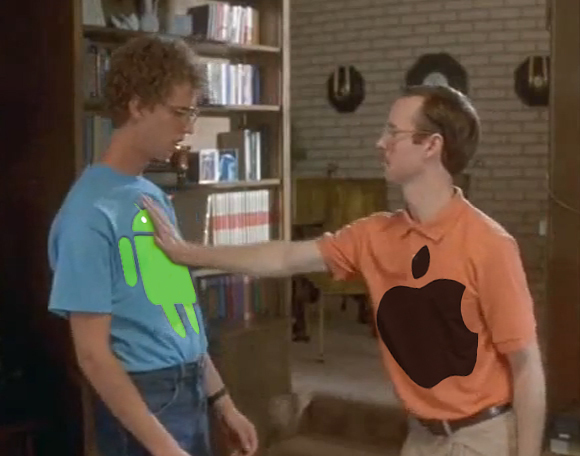 As many of you began winding down from Christmas, those with their ear to the ground may have heard a thing or two about an article by Fortune that has set tongues wagging and opinions flying about the fate of Google's Android platform in 2011.

Fortune's Google roundsman Seth Weintraub certainly made his intentions clear from the get-go last week, proclaiming that next year will be the year ''Android explodes''.

''Smartphones will likely blow by traditional computers next year as the way most of the world gains access to the Internet,'' he said.

Drawing on knowledge gained from a discussion with Broadcom VP Jim Tran, Mr Weintraub claimed that smartphones using the new chipset are to be announced at CES next month and could retail for less than US$100. But wait, there's more:

''By this time next year, Broadcom says it will release a follow-up chip that will allow WVGA displays and as much power as today's high-end Smartphones at the same $75-$100 prices.  That Nexus S that costs $530 now off contract will cost just a fraction of that in just one year,'' he said. Mr Weintraub's implication is that only the Android platform is poised to take advantage of the low-cost smartphone market.

''Those prices will have many feature phone users saddling up with smartphones. And they may open the emerging Asian markets, like India and China, to smartphone customers on a large scale, for the first time ever. That means many more smartphone users and many more Google and Android users, too,'' he said.

Low-cost smartphones apparently mean bad news for Apple, with Mr Weintraub painting a picture of a world where Android activations are booming and the little phone that Steve built is ''at the top of the market, affordable only to those willing and able to pay a premium for Steve Jobs' aesthetic sensibilities.''

Such strong opinions were bound to have others offering equally strong opinions in response, and so they did. Venture capitalist Fred Wilson was first off the mark, urging other VCs to get behind Android.

''If you haven't put all the pieces of the story together, let me do it for you. Smartphones prices are about to plunge and the result will be hundreds of millions of people all over the world starting to use them. And many of these devices will be running Android, not iOS. And wireless data prices will likely come down too.''

Tech enthusiast Robert Scoble begrudgingly agreed, claiming that Android devices have all but shaken off the glitches and general oddities that plagued the platform in its early versions. ''Compare Android to every other platform and it stands up as the best choice,'' he said.

Next year, he said, is set to be a ''great year'' for Android, a ''moderately good year'' for Windows Phone 7, a ''struggling year'' for Nokia and RIM and a ''wildcard year'' for Palm/HP. The iPhone's continuing success will depend on the device's much-rumoured arrival on Verizon, he claimed. But even then, he failed to see how a Verizon iPhone ''will sell enough iPhones to keep it in the numbers race with Android.''

That's a shame, Mr Scoble wrote, because Android devices aren't the best designed. In terms of overall ease-of-use, app quality and interface consistency, he claimed that iOS still easily trumps Google's mobile OS. He offered a range of options Apple could take to get themselves back in the game in 2011; that list is a little long to add here, but it essentially boils down to four things - lower prices, more carriers, more innovation and more integration.

TechCrunch's MG Siegler was last to the party, but made up for lost time by hitting back at Mr Weintraub's claim that lower component costs will absolutely mean cheaper smartphones.

''I find it very hard to believe, for example, that the carriers (in the U.S., in particular) won’t find a way to screw us in 2011. It’s an artform they’ve perfected over the past two decades. But on paper, at least, it all sounds great,'' he said.

And while the line is blurring between Android and iOS-powered devices, Apple's total ecosystem control will make a complete collapse of Apple's mobile platform a slim possibility, he argued. That doesn't mean Apple can beat Android - and in fact, it may not want to, he said.

''Apple cannot win an arm’s race with Android because they will not attempt to. They’re perfectly happy “at the top of the market” where they make a ton of revenue and profit. Billions more, in fact, than Google does with Android,'' he said.

User choice will be the determining factor, he said.

''I couldn’t care less if the iPhone or Android is the market leader. All I want is the ability to choose which device I want to use. And I’m sure that’s Google’s stance on the matter as well. They love the iPhone because it brings them search revenue just as Android does. I just don’t trust what the carriers will do with their Google-powered leverage in an Android-dominated world.''

Let me make my intentions with this article crystal clear - it is not my intention to weigh in on either side of the ''Android in 2011'' debate. The so-called ''smartphone wars'' are far from over and it remains to be seen which platform will emerge ''victorious'', or if there will even be a victor at all; as MG Siegler pointed out, Apple would likely have little problem with a niche label. Instead, what I hope to do is foster debate among the Neowin community about what this next year will bring for the smartphone market and each respective platform.

So, fellow Neowinians, over to you.