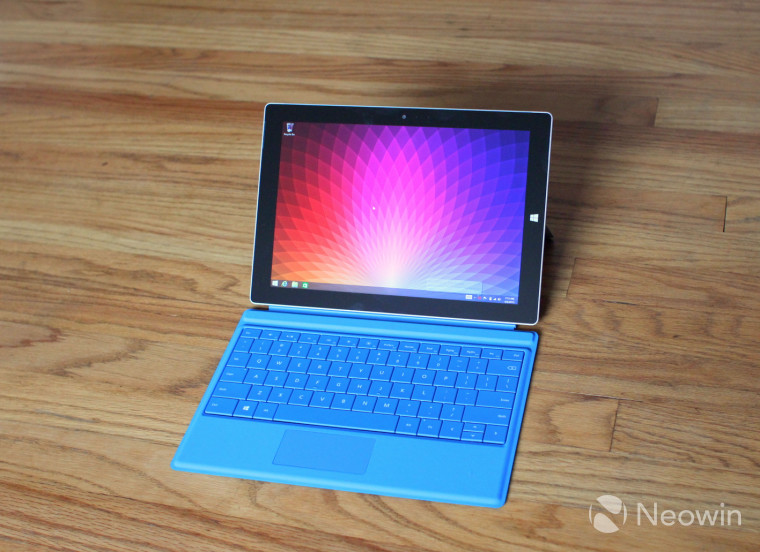 Microsoft says that the Type cover has 'snappier' keys and improved sound dampening which gives the cover a refined feeling over the previous generation cover. They also said that the trackpad has been improved as well.

The first thing I noticed is that this shade of blue is much brighter than the older Type cover. Even though my Pro 3 Type cover has been heavily used, it's clear that this is a new shade of the color.

The keys do a feel a bit firmer with the new keyboard but it's hard to tell if that's the new design that Microsoft told me about when they announced the new device or if it's because the older Type cover is heavily used.

The trackpad feels nearly identical to that of the older cover so there's nothing new to report here. The clicking mechanism does sound a bit louder and more confident, but again, this cover is brand new.

The biggest change worth noting with the keyboard is that Microsoft has updated the function keys along the top row. Microsoft has replaced the keys that were primarily used in Windows 8 (charm buttons) and replaced them with more useful keys like print screen, insert, and brightness keys.

The functional key changes are a small update but one that will make a big difference for power users. And for those that are curious, the keyboard does support the magnetic folding setup that the Pro 3 introduced.

The last change is that Microsoft has dropped the 'Surface' branding from the cover and now simply brands it with 'Microsoft'. This should not be a big surprise either as the company has been moving towards branding every thing with 'Microsoft' as opposed to their individual brands.

In my short time typing, I didn't have any issues with the slightly smaller cover after I adjusted to the new size. Like any new keyboard, it will take you a minute or two to become comfortable with the size but I had no issues making the jump from the Pro 3 to the Surface 3.