Acer has officially announced the Iconia W3 today at Computex 2013, packaging Windows 8 inside an 8-inch tablet for the first time. We have already heard a lot about the Iconia W3 through last month's flurry of leaks, but today we're getting all the official information on the Atom-powered device. 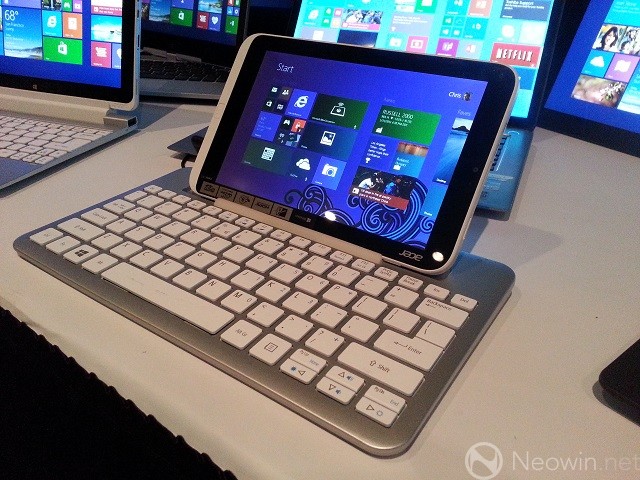 As expected, the W3 is powered by an Intel Atom 'Clover Trail' Z2760 processor at 1.8 GHz, it has an 8-inch 1280 x 800 display and either 32 GB or 64 GB of internal storage plus microSD card expansion. You also get front and rear facing two-megapixel cameras, Bluetooth 4.0, microUSB, micro-HDMI and an optional full-sized keyboard dock that contains a keyboard similar to that of Acer's 13-inch notebooks.

The Iconia W3 will be capable of eight hours of battery life, according to Acer, and the unit will weigh around 540 grams with 11.35 mm of thickness. The tablet runs Windows 8 Pro out of the box, and will also come with Office 2013 Home & Student bundled at no extra cost.

The tablet will be priced at $379 in the United States with the keyboard costing an additional ~$90, but it's unclear at this stage whether that will net you a 32 GB or 64 GB model. It will be available for pre-order starting tomorrow, with general availability coming by the end of June.