Apple and Adobe aren't the best of friends. Steve Jobs, CEO of Apple, is rather well-known for his general dislike of the Flash technology, as it is the leading cause of crashes on the Mac OS X platform. When Apple announced its iPhone a few years back, a lot of people noted that there was no Flash support whatsoever, not even in the form of Flash Lite; this very same issue appeared again when Apple unveiled the iPad just under two weeks ago, and is still very much a problem for some. To show the interest that iPhone users have for Adobe's technology, the company told SFGate that they logged over 7 million Flash download requests from the iPhone OS platform during the month of December, an obviously substantial number.

Following the announcement of the iPad, Steve Jobs held a town hall meeting for employees of Apple to go and ask questions. Jobs got onto the topic of Flash and called Adobe lazy for not improving it on the Mac platform (which Adobe has since addressed), proving his general negativity towards the software. The debate of whether or not Apple should include Flash on the iPhone OS is ongoing, though you can safely bet that the Cupertino-based company won't allow it anywhere near its handheld devices – Jobs has made it clear that he believes HTML5 is the future, a web standard that is still being worked on.

Jobs' feelings for Flash aside, there are numerous reasons as to why Apple would not want to support Adobe's software. Firstly, the technical: Flash, whilst being a huge player in video over the Internet, also boasts a gargantuan selection of games and other forms of media. As you will all know, this heavily relies on having a mouse to point and click – something which touchscreen devices are somewhat lacking. This has been pointed out before, and will continue to be pointed out. In addition to this, if Adobe's implementation of Flash on the iPhone is anything like what is found on Mac OS X, you can surely say that before long, Apple will be criticized for letting it on there in the first place. Apple is very much known for its "walled garden" way of thinking when it comes to the iPhone OS; applications have to venture through the App Store approval process, which has generally improved lately (though, yes, still sees complaints), helping to keep quality under control at the expense of developer's time. Different people have different views on this way of thinking, neither of which is really right or wrong, so we won't tell you otherwise.

Another reason that Apple is keeping Adobe away from its mobile platform is the fact that it is one company that controls so much. Millions of people use Flash content daily, simply because it's there and it does the job, though that does have problems: if any security issues (or otherwise) appear, everybody has to wait for Adobe to fix it. Apple is a company that very much likes to be able to do what it wants when it wants, as you will have learned from the iPad launch – the company has even started using its own A4 CPU, meaning it controls the software and a large portion of the hardware, allowing it to rely only on itself for its products. Say Flash is allowed onto the iPad, iPhone, and iPod touch, and then a problem appears... Apple would be helpless, awaiting Adobe to do the work, which is a position it very much doesn't want to be in.

People will complain and nag for months to come about the lack of Flash, but don't get your hopes up. Apple will almost certainly prevent the software from ever reaching its iPhone OS devices, which causes fairly big problems for Adobe. If Apple wants to help get rid of Flash in order for an open web standard to take its place (in this case, HTML5, which major sites (including YouTube) have recently begun taking advantage of), it will have to take the heat for a while. It's no good if they decide to allow it, but tell Adobe that they have to improve it, as nothing will get done; it's on the device, people are using it, Adobe is happy. You may loathe Apple for preventing Flash, which is the exact reaction most would expect, but don't expect to make a difference. 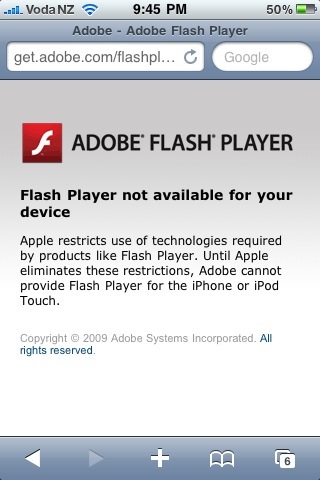