Opera said on Wednesday that it plans to reveal Opera Mini running on the iPhone at an exclusive press and partner preview during the 2010 Mobile World Congress (MWC) next week.

“We are thrilled to offer journalists and partners an exclusive preview of Opera Mini for iPhone during the year’s biggest mobile event,” said Jon von Tetzchner, Co-founder, Opera Software. Tetzchner also adds that Opera will also showcase their latest beta releases of Opera Mobile and Opera Mini on "other platforms and devices". Historically Apple has always rejected applications that have duplicated the original functionality on the iPhone. However, the Californian based company has approved a number of web browsers for the iPhone recently. Mercury Web Browser is available in the App Store free of charge as is described as "the best replacement for Safari".

Opera Mini for iPhone is not publicly available yet and Opera have not confirmed when it might show up in the App Store. 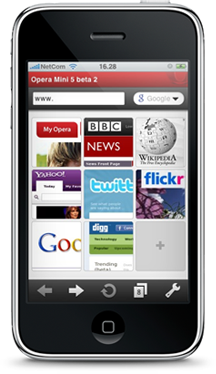