More than a year after its announcement, Amazon's Cloud Player app is finally available for the iPhone, iPad and iPod Touch on the Apple App Store.

Originally debuting in March 2011, Amazon's Cloud service lets users stream their digital music library to various platforms, starting with web browsers and reaching Android devices in October 2011 according to Amazon's own app page. iOS users were left in the dark, barring an unofficial workaround with the mobile Safari web browser, until today's release of the official native app. 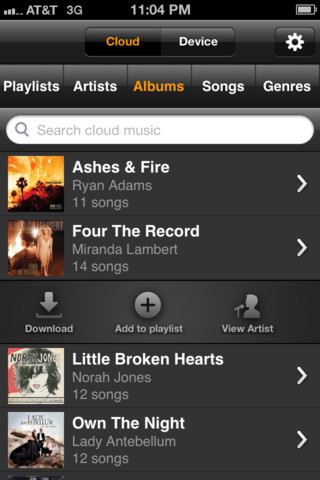 Albums and songs that are purchased from Amazon.com will be automatically added to users' digital libraries, and can then be streamed freely to any supported device. These purchases will not count against the free 5 gigabyte quota Amazon gives all users, which can be filled with other DRM-free music as desired. Of course, Amazon offers paid services with more storage, starting at 20 gigabytes for $20 per year and going up to 1,000 gigabytes for $1,000 per year.

The new iOS app performs as advertised, streaming online music easily over WiFi or 3G (an option can disable cellular data transmission for those with data concerns). Music stored in the cloud can be saved directly to the device if desired. The app can also play music stored locally from the device's iTunes library, so you don't have to switch between apps to listen to your separate iTunes and Amazon MP3 collections.