According to a new report from Counterpoint Research, Apple managed to lead the smartphone market in the UK in Q317 with a 34.4 percent market share, followed by Samsung (34 percent) and Huawei (13 percent) in the second and third spot, respectively. Unlike Apple, Samsung and Huawei have smartphones which cater to almost all market segments, not only the premium one.

The top five brands, including Apple, Samsung, Huawei, Alcatel, and Motorola, are dominating the market with over 80 percent of the smartphone market share in the UK.

“Apple continued to lead the smartphone market with just over 34% share despite sales declining sequentially. Samsung was the second largest brand, slightly behind Apple, with flat market share YoY. The Chinese giant Huawei was the third largest brand, with consistent double-digit market share, leveraging a diverse portfolio across all price-tiers, but still some distance behind Samsung and Apple that represent something approaching a virtual duopoly. 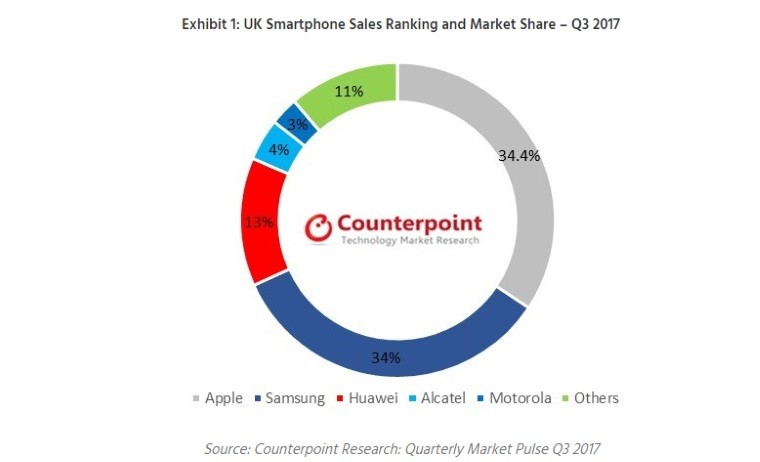 The UK is a strong market for the Cupertino company with the iPhone 7 leading the way when it comes to top smartphones with a 15 percent market share. The Samsung Galaxy S8 and Galaxy S8+ are at second and third spot with a nine and six percent share, respectively. Samsung's budget-friendly Galaxy J3 is in fourth place with six percent share as well. Research Director, Peter Richardson added,

“The Apple iPhone 7 was the bestselling smartphone and contributed to 15% of the total smartphones sold in Q3 2017. Samsung’s Galaxy S8 and S8 Plus were second and third. Samsung also has a strong range across all price bands and it, together with Huawei, provided a strong volume platform that was resilient to attack from most other brands.”

Apple's iPhone 7 outsold the iPhone 8 mainly because the newer iteration offers the same design with almost similar specifications with a considerable difference in price, added to the fact that Apple was gearing up to launch the tenth-anniversary iPhone X. It will be interesting to see how the numbers change in the next quarter for Apple, and if the iPhone 7 can continue to lead the market, especially after the shipping estimate of the iPhone X have now come down to just one to two weeks.