Last month, Apple released iOS 10, making it available for many of its older mobile devices. That OS version came pre-installed on the iPhone 7 and 7 Plus, which it also launched in September.

Shortly before iOS 10's release, Apple's official data showed that iOS 9 had been installed on 88% of the company's active mobile devices, a year after that version first began rolling out. It took iOS 9 just three days to reach 50% of devices in 2015, but the iOS 10 rollout seems to be proceeding at a much slower pace. 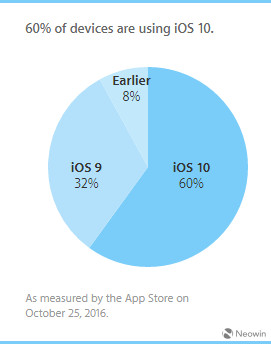 Just over two weeks ago, Apple revealed that iOS 10 was installed on 54% of iOS devices, almost a month after its release. Today - at the unveiling of its new MacBook Pro, where it also announced a new TV app for its Apple TV box - the company revealed that that figure has now climbed to 60%.

All of that growth for iOS 10 has come at the expense of iOS 9, which has dropped by 6% since October 11. iOS 8 and earlier versions of the operating system remain in use on 8% of active iOS devices.

On Monday, Apple released its latest update, iOS 10.1, bringing a range of improvements and fixes.