Apple has recently been granted a patent that blocks iPhones from taking photos and recording videos during concerts and places where it is deemed prohibited. 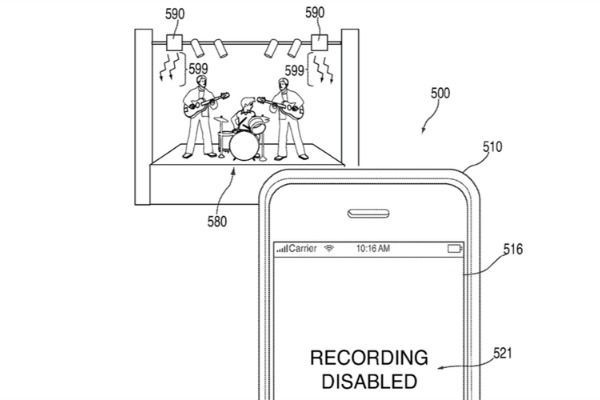 The Cupertino company applied for the patent back in 2011, describing a camera detecting an infrared signal and then interpreting the data. With this, companies that want to prohibit picture taking and video recording in areas they specify could be able to turn on a specific signal that would block iPhones from taking any footage. More specifically, the patent explains:

For example, an infrared emitter can be located in areas where picture or video capture is prohibited, and the emitter can generate infrared signals with encoded data that includes commands to disable the recording functions of devices. An electronic device can then receive the infrared signals, decode the data and temporarily disable the device's recording function based on the command.

The system could help business who want to prohibit taking pictures or recording videos in their area, like movie theaters, and other sensitive locations.

However, while the patent kills the idea of recording a video in concerts and related events, the patent explains that the infrared signals can be used to display useful information on iPhone screens when pointed at something specific in a room.

While we may not see such technology being implemented on the iPhone anytime soon, it would be interesting to see how this would be received by many who just loves taking photos just about everywhere.