While many users have comfortably downsized their mobile computing requirements from big, beefy 15-inch laptops to 11-inch Ultrabooks and even smaller tablets, there are still some that prefer a bit more screen space on the move. But if even a 17-inch notebook still isn't enough, ASUS has something for those with bigger ideas in mind. 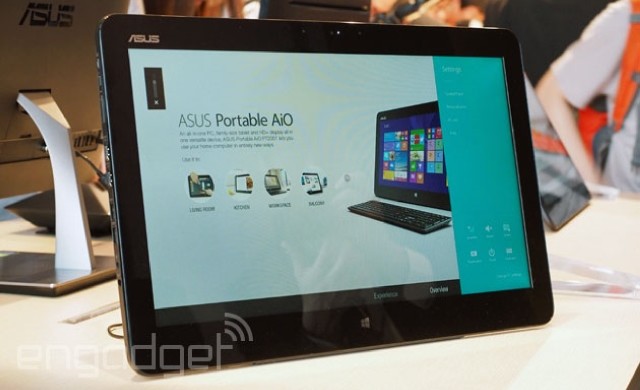 Today, the company announced its new Portable AiO which, as its name suggests, is a portable all-in-one PC, including a touchscreen and Windows 8.1. Unlike most all-in-one systems, which are generally designed to be compact but still desk-bound, this one is intended to be picked up and carried to wherever you need it to go.

In fact, the 20-inch system even includes its own carry-handle, along with a battery that ASUS says is good for five hours of usage on the move, along with a fold-down kickstand. That said, the handle doesn't look terribly comfortable for one's fingers, and Engadget said that they were "left wishing for a handle that was a little more substantial" after they picked up the 3.2kg device. 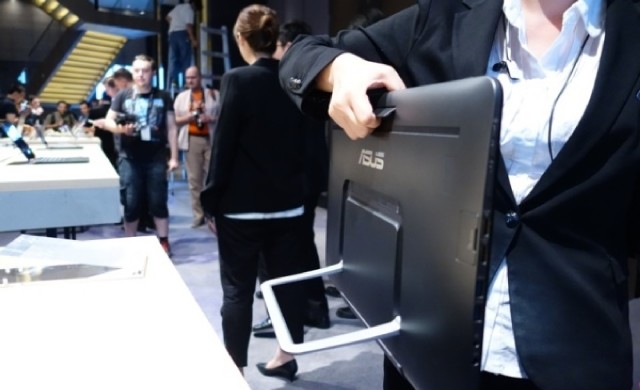 The Portable AiO is largely intended for families, and its spec sheet reflects this. The 20-inch IPS LCD doesn't even feature Full HD resolution, having to make do instead with 1600x900px. There's also an Intel Core i5 processor, along with 4GB of RAM, with graphics powered by the NVIDIA GeForce 820M.

Despite its onboard battery and handle, it's unlikely that many users will want to carry the device with them on the bus to work, and few passengers will thank you for placing it on the tray-table next to theirs on the plane. The lack of a keyboard also makes this a less-than-ideal candidate for getting stuff done on the move, unless you fancy carrying one with you, or relying entirely on the on-screen controls.

A more likely scenario is for the Portable AiO to be moved around the home. The system features integrated gesture controls, which could be perfect for use in the kitchen while cooking, for example, before moving the device to the bedroom to watch a movie.

Pricing and availability details have not yet been announced.