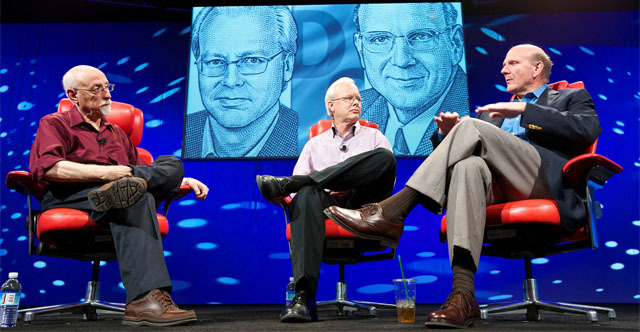 A large amount of the interview was focused on the future of cloud computing and Microsoft's role as a software company in pushing services to the cloud. Ballmer was questioned over business concerns regarding privacy. Many businesses are concerned that companies will look at their data if they host it in the cloud. "There’s got to be a dialogue with the customer, the customer has to be allowed to make the choice. Different customers have different comfort levels, we're trying to find a way to let people make those choices" Ballmer said.

Questions moved on to the future of the PC. Steve Jobs envisioned the next five to seven years where people will start using a PC less and move to smartphones and tablets. Ballmer explained he believes people will be using PCs in the future and in greater numbers. "They'll get smaller, lighter, sometimes they won't have a keyboard. Sometimes the UI will look different" said Ballmer. He also said the iPad is a PC too and that Microsoft will have Windows tablets. "You’re going to have a range of devices over time that are light and don’t have a keyboard and will run Windows", said Ballmer.

The conversation then shifted to the mobile space. Ballmer praised BlackBerry manufacturer RIM. "They’re obviously a good competitor. There’s this old myth that they’re primarily an enterprise company, but they’ve done quite well in the consumer market" said Ballmer. Ballmer also recognised Apple's achievements in the mobile space. "They’ve done the best job on the browser. People focus on the apps, but the browser is really the thing that has distinguished their phones from others." Ballmer also admits that Android is a real competitor in the phone space. He explained he's confused as to why Google has two operating systems. "On the larger screen devices, who knows. I don’t know that these Android based things will matter."

Ballmer also answered questions on Bing. He explained that Bing is the first search engine to gain market share in a long time but that it's a long game. "We’re up 54 percent in unique users year over year, our demographics are good", he stated. " I think we have our work cut out for us in a battle with a very large behemoth."

Questions finally shifted to the audience, one member asked about advice for Google and Apple who are both facing antitrust issues. "You don't give advice to your competition...I just wish them good luck getting lots of experience", Ballmer said to applause and laughter from the audience. After some more questions Ballmer was asked whether Silverlight runs on the iPhone. "It certainly doesn't run on the iPhone. My guess is if it did it would be blocked! That's just my guess".

Microsoft's Ballmer and Ozzie on Cloud: