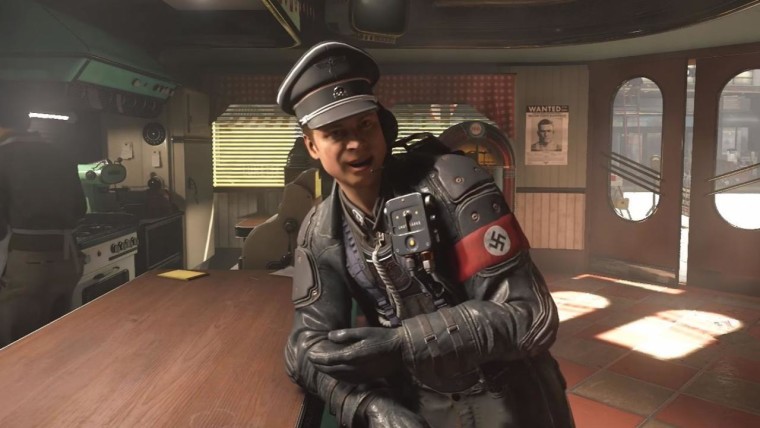 It used to be that if you saw a swastika in a game, you knew you had to kill those bad guys, disrupt their plans, and make life miserable for them. However, under today's political climate, it isn't as clear-cut anymore. So Bethesda's Wolfenstein II: The New Colossus is causing some uproar. And to be honest, Bethesda doesn't care, and it even egging on the dissent.

A tweet by the official game account pushed the upcoming game with the hashtag #NoMoreNazis. The attaching snippet of video also showed a Nazi flag, ubertroopers from the game, and a line about "not my America."

While the marketing is causing some outrage among the alt-right, Bethesda is standing its ground. "We're certainly aware of current events in America and how they relate to some of the themes in Wolfenstein II," Bethesda's VP of PR and Marketing Pete Hines told GameIndustry.biz. "Wolfenstein has been a decidedly anti-Nazi series since the first release more than 20 years ago. We aren't going to shy away from what the game is about. We don't feel it's a reach for us to say Nazis are bad and un-American, and we're not worried about being on the right side of history here."

From Castle Wolfenstein by Muse Software in 1981 to Wolfenstein 3D by id software in 1992, killing Nazis was a central theme. Then, when Bethesda relaunched the franchise with Wolfenstein: The New Order in 2014, protagonist BJ Blazkowicz was again making hunting and killing the swastika-wearing enemies as a means to the end of stopping their subversion of America.

"[In the game] freeing America is the first step to freeing the world," Hines said. "So the idea of #NoMoreNazis in America is, in fact, what the entire game (and franchise) is about. Our campaign leans into that sentiment, and it, unfortunately, happens to highlight current events in the real world."

He emphasized that the game was in production long before the current political climate changed, and events such as Charlottesville became big news. "It's disturbing that the game can be considered a controversial political statement at all," Hines said.

Games have always not been afraid to tackle political topics, and unfortunately, Wolfenstein II is coming out at a time that it is political commentary whether it was intended to be or not.

"This is what our game is about," Hine said. "It's what this franchise has always been about. We aren't afraid to embrace what BJ stands for and what Wolfenstein represents. When it comes to Nazis, you can put us down in the 'against' column."