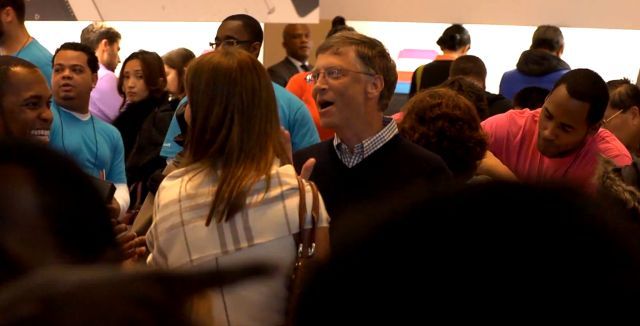 When Microsoft had its massive Windows 8 launch in New York City's Times Square a couple of weeks ago, the company didn't indicate to the press or the general public that the company's chairman Bill Gates might show up. Yet, in a newly posted video from Microsoft showing the launch of Windows 8, Gates is indeed seen, very briefly, inside the Microsoft Store in Times Square.

The video, posted on YouTube, has Gates inside the store and talking to customers (you can see him at the 1:08 mark). It's possible that Gates actually showed up on October 26, the day after the Windows 8 launch. This is because we also spotted a couple of images that were posted on the Flickr account of a man name Tom Starkweather who took two photos of Gates walking around by himself in Times Square on October 26th.

The rest of the video shows what we previously reported Microsoft was doing to help promote Windows 8 in Times Square, including turning a lot of the square's electronic billboards into Windows 8 Start screen tiles. It also included live hardware demos of many Windows 8 PCs. Apparently, one man decided to propose marriage to his girlfriend as part of the demo festivities.