With today's launch of the Windows 8.1 Preview, Microsoft also delivered the first preview of the latest version of its web browser, Internet Explorer 11. In a media briefing at its BUILD developer conference in San Francisco, Microsoft explained why it believes that "the best experience of the web is on a Windows device with Internet Explorer 11". 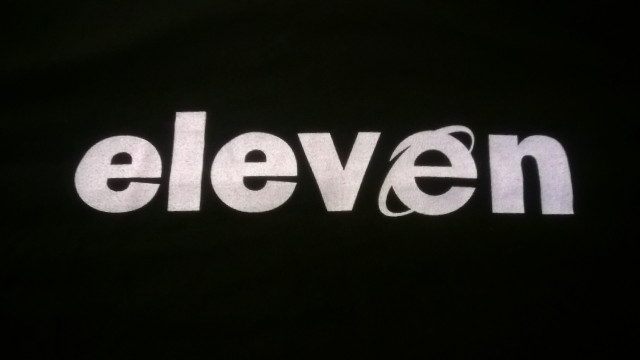 "Other browsers run everywhere, but not with excellence in one particular place," according to Microsoft's Dean Hachamovitch, corporate vice-president for Internet Explorer, "and that's an opportunity." He added that such browsers "don't have the performance or responsiveness that you want", particularly when it comes to touch.

The limitations of other browsers, he said, are in stark contrast to IE11 on Windows 8.1. "IE11 is a lot like you - it's about more than one thing at a time", he said, noting that rival browsers on mobile devices limit users to viewing one page or tab at a time. He added that "IE11 is perfect for touch, delivering 'stick-to-your-finger' responsiveness" when navigating the web. 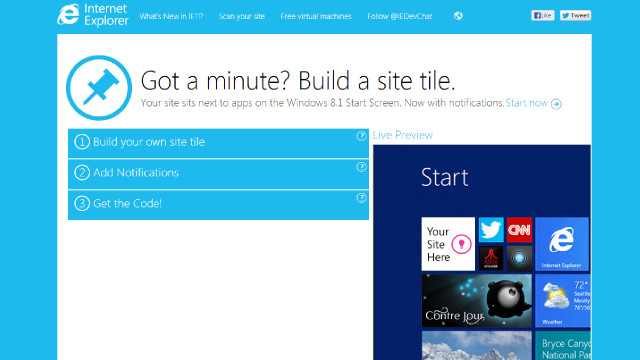 With Internet Explorer 11, Microsoft is expanding on the ability to pin websites to the Start screen, with the launch of Live Tiles for sites. The company has even created its own site to help developers to take advantage of this opportunity at www.buildmypinnedsite.com, which offers a simple wizard to create code that allows sites to push notifications directly to a pinned tile on a user's Start screen.

This isn't the only enhancement in IE11. "Most of the web wasn't designed for touch, but users still expect it to just work,", said Hachamovitch. One example that was highlighted was web page navigation that relies on mouseovers, where hovering the cursor over a particular target causes a menu to open. The natural behaviour for users is to either tap the target or push and hold, which usually just activates a link which advances the user to a page that they didn't intend to navigate to, or opens a software menu bringing up browser options.

In IE11, Microsoft has integrated support for this kind of scenario, allowing users to touch a hover 'hotspot' so that the menu stays open to enable the user to click on the actual link that they're seeking. IE11 is also the first browser to fully support HTML5 drag-and-drop interaction with touch. Microsoft says that developers don't need to do anything special to make this happen on their sites; just adhere to HTML5 standards, and the browser does the rest.

Microsoft also talked up its improved keyboard support in web page forms in its new browser; tap on a phone number field, and you'll get a number-centric keyboard; tap on a field requesting an email address, and you'll get a keyboard that includes shortcuts for URL suffixes, such as .com or co.uk. 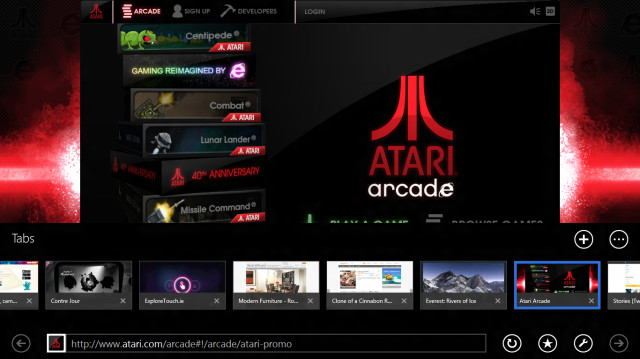 There's also much-improved tab support in IE11; you can now have up to 100 tabs open per window, and you can open multiple Internet Explorer windows concurrently. IE11 also manages tab resources more effectively; those tabs that haven't been active for a while will be de-prioritised, using fewer system resources than those that you're frequently jumping between. But if you then jump to a tab that's been less active for a while, it will 'instantly' come back to life with all requisite system resources available to display the page and its content as required, without affecting the user experience. 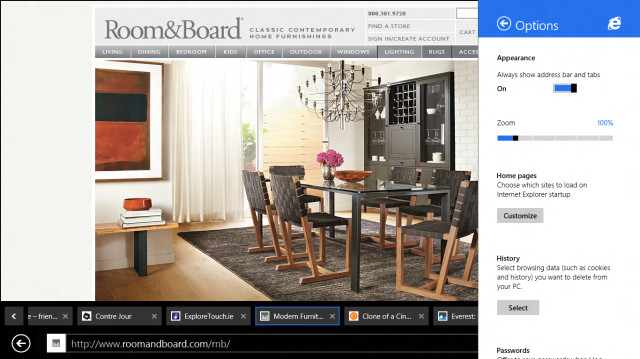 On the user interface side of things, users can now keep the tab view permanently pinned open, rather than the slightly frustrating experience in Modern IE10 of seeing the tab thumbnail bar disappearing every time it's used. 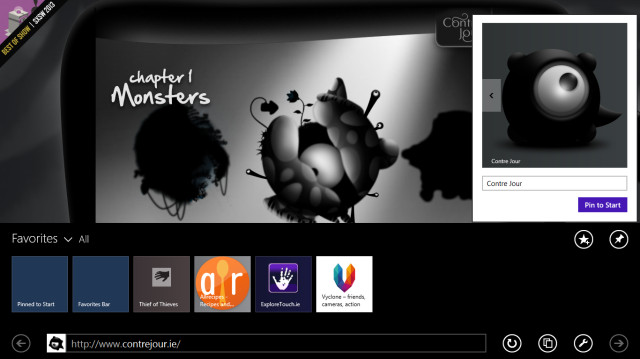 Microsoft also says that it's dramatically improved its support for favorites on Internet Explorer 11, with a new Favorites Center, which synchronises your bookmarked sites across all of your devices through Microsoft Account integration. The favorites themselves are individually customisable too; you can choose a picture to represent the thumbnail tile for a page, rename the favorite itself, and group these bookmarks into a folder structure of your choice.

Web account management is also offered, with the ability to save log-in details for the sites that you choose, and synchronise those details across your devices too. This is also fully customisable, allowing you to select specific sites to take advantage of this feature, or it can be deactivated entirely. 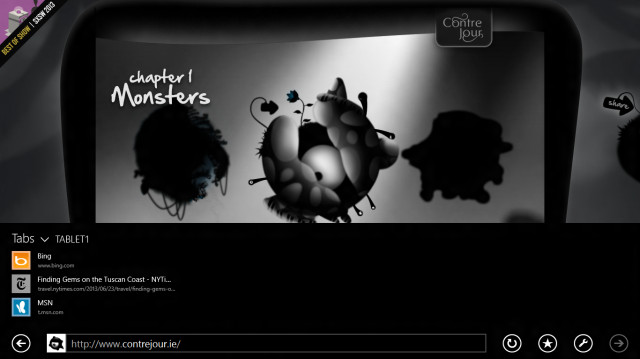 Tabs can be synced across devices too, making it easier to maintain workflow when switching between devices.

Under the hood, Microsoft says that IE11 is the first browser to fully accelerate the entire JPEG image pipeline; the GPU decodes the image and readies it for instantaneous display. Text rendering is also dramatically improved, some thirty times faster than Internet Explorer 10, and thirty times faster than its rivals, with the whole process being delegated to the GPU, rather than exhausting the CPU with these tasks, which Microsoft says is a much more efficient and power-efficient way of processing and displaying pages.

In another first, the company says that IE11 is currently the only browser to support the W3C resource priority stack, allowing web designers to identify which parts of the page must be loaded first and which elements - such as user comments, usually right down at the bottom of a web page - can be de-prioritised as the page loads.

As for when we'll see Internet Explorer 11 make its way to other Microsoft platforms, the company is playing it coy for now. The company line is the usual "we have nothing to announce at this time", although Hachamovitch did add that "we work very closely with the Xbox and Windows Phone teams", hinting at future releases on those platforms - and frankly, this seems inevitable.

And will Windows 7 ever see Internet Explorer 11? "We've made our commitment to Windows 7 very clear," he said, adding: "Wink, wink." We'll take that as a yes.