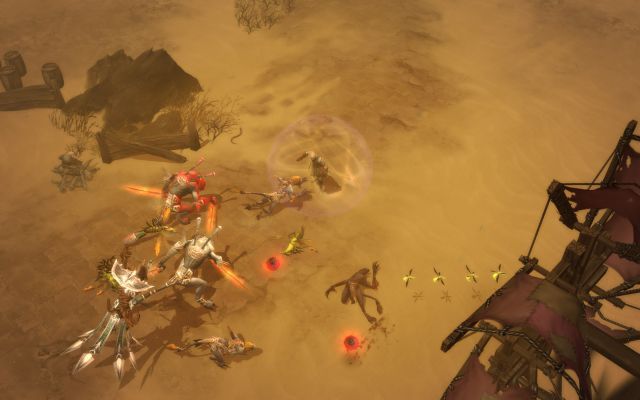 Diablo III is one of the most anticipated games of all time, and today the action-RPG's developer and publisher Blizzard Entertainment revealed more info about the game's upcoming beta test.  While there is still no specific release date yet for the beta version (it's supposed to start sometime in the current quarter) Blizzard's web site gives out a ton of info of what players can expect to play and use in the beta test, including an in-game auction house that will use real money.

First the good news: players will be able to use all five of the game's character classes in the beta version (barbarian, witch doctor, wizard, monk and demon hunter). As with previous games in the series players will be able to battle in randomly generated levels which means that every play experience should be different. The beta's game content will be from the early portions of Diablo III. If you want to be considered for the beta you need to have a Battle.net account and then click on the Beta Profile settings in its account management. Both Mac and PC players will be accepted into the beta.

Blizzard also revealed more info on the in-game auction house for Diablo III. The feature will allow players to buy and sell in-game items like weapons, magic items and more with real money. Blizzard has already announced it does not plan to offer any in-game items via the auction house; it's supposed to be just for the players. However Blizzard plans to take a "nominal fixed transaction fee" for items sold in the auction house.

Now the bad news: PC Gamer reports that the final version of Diablo III will require a constant online connection. That means you must be connected to the Internet at all times to play the game. Blizzard said that part of the reason for this decision was to prevent cheating. The other bit of bad news is there will be no mod support at all in Diablo III and mods will be "expressly prohibited by our terms of use for the game."

Blizzard has said in the past that it would like to release the final version of Diablo III by the end of the year but also warned that there is still no official release date yet for the game.