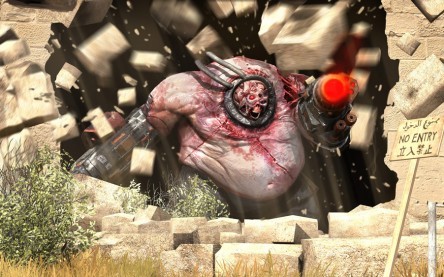 Editor's note: Serious Sam 3 is Neowin.net's sponsor for E3 2011. That sponsorship has no effect on our editorial views on the game.

Duke Nukem may be back soon but another over-the-top shooter series is returning after a few years of rest with an all new entry as well as some side projects. E3 2011 saw us go hands on with Serious Sam 3: BFE, the next game from developer Croteam. The game is actually a prequel to the events in all the previous Serious Sam games as Sam "Serious" Stone goes after the alien Mental once again. But let's face it; you don't buy this game for the story. You buy to shoot tons of enemies on screen. In that regard it looks like this game will deliver.

We got to see two levels from the full version. One, which we did not actually play, takes place in a war torn Cairo and really shows off Croteam's own in-house Serious Engine 3's graphics which rival the best out there. We start out slow with just one or two enemies on screen at first but soon things ramp up with a number of characters firing or attacking you. We saw some familiar looking enemies such as the headless shooters and kamikaze bombers. All of them have gotten a huge bump up in terms of graphics and polygons. In fact early in the game you can do some melee action on the one-eyed creature by pulling his eye out and throwing it. We also got to see a new melee weapon, the sledgehammer, that can pound creatures to a bloody pulp. It can also be used on walls to expose some secrets and additional shortcuts in the level.

The second part of the demo is the one we got hands on with as we were in the open desert during a sandstorm as we battled a massive number of enemies on screen including the big creature you see in the above screenshot. The game was set to God mode for the demo and that was a good thing as the enemies were pretty relentless. Having a sandstorm also obscured the view of your foes.

All of the trappings of Serious Sam are in the new game; huge environments, lots of goofy enemies, and the familiar weapons (we love you double barrel shotgun). If we had a complaint it would be that besides the graphics and a couple of other small features there wasn't a lot that we have seen before in previous games in the series. However we know that Croteam must have some things planned that we just don't know about yet. We look forward to seeing the full version of Serious Sam 3: BFE in action later this year.