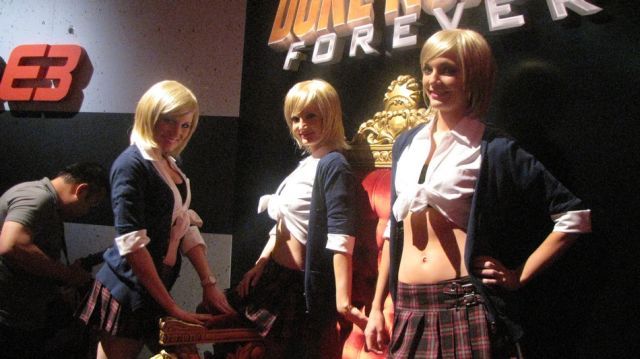 Day 2 of E3 2011 is about to start up at the Los Angeles Convention Center and that means booth babes will be returning to put on their outfits and show off their talents for the attendees and hopefully promote upcoming games. In our second E3 2011 booth babe gallery we feature quite a few more of our favorite models from the show floor.

Duke Nukem Forever is a big part of 2K Games' E3 booth this year, even though the game is completed (and apparently leaked to pirate sites) and due to be released officially in Europe in a couple of days before coming to the US on June 14. The Duke Nukem schoolgirl models were highly popular at 2K Games' booth as men sat in Duke Nukem's chair to get their picture taken with the babes. We remember an actor who actually played Duke during E3 in the late 1990s that was impressive but this year there's no such person. Too bad.

One interesting development in E3 2011 booth babe land is Electronic Arts. In the past, EA has been one of the few major publishers to not have any booth models in their exhibit at all. But that's changed this year. Models promoting games like SSX, Need For Speed The Run and Mass Effect 3 were on EA's show floor in interesting outfits. We are not sure why EA has had this policy change but we don't think people will complain about it.

Stay tuned as we will post our final E3 booth model feature on Thursday ... and this gallery will actually feature some guys.