The second half of this year will see the public release of Windows 11 22H2 feature update as confirmed by Microsft itself. It will also see the clash of the hardware behemoths as both Intel and AMD will be releasing their upcoming processor architecture. It is expected that AMD will release its Ryzen 7000 series based on Zen 4 first, followed by Intel's 13th Gen Raptor Lake-S CPUs.

First up we have the arithmetic (integer and floating point) benchmarks and in this test, the new Raptor Lake CPU has massive gains over its 12th Gen 12900 counterpart. In fact, in one instance, the performance has even doubled. This is enough to take the Core i9-13900 over the Ryzen CPU as well, an impressive showing. The extra two clusters of smaller Gracemont cores on Raptor Lake really seem to help here. As such, the Raptor Lake i9 CPUs are 24 core 32 thread parts compared to 16 cores 24 threads on Alder Lake. 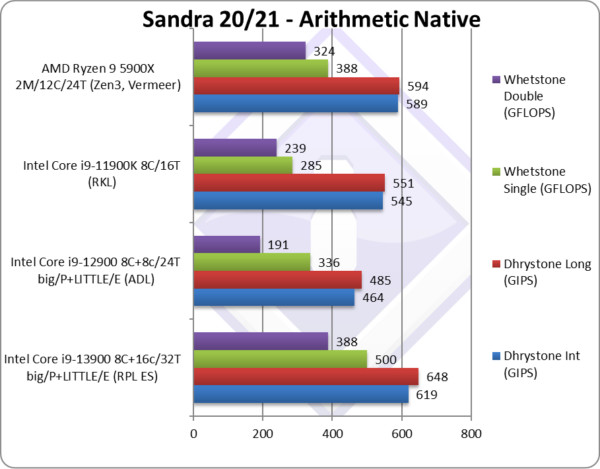 Up next, Vector SIMD (Single Instruction, Multiple Data) benchmarks were tested and unlike in the case of non-SIMD, the performance gains here for the Raptor Lake-S i9-13900 are rather modest compared to Alder Lake. The bigger takeaway is that the upcoming Intel CPU is unable to beat the Ryzen 9 5900X as the latter enjoys a healthy performance lead. 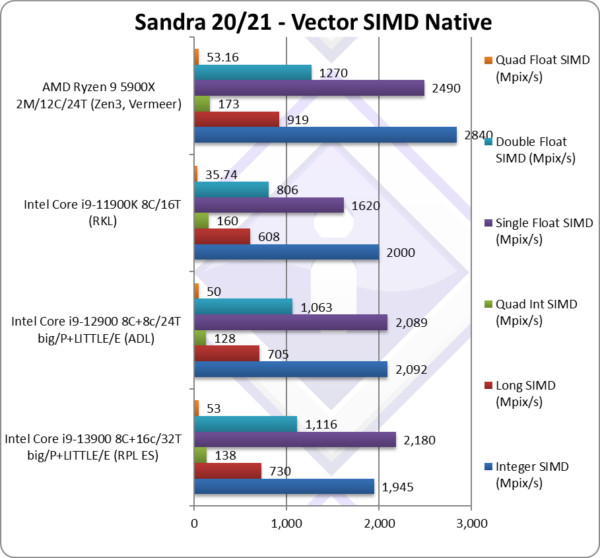 As such, SiSoft remarks that the upcoming Intel chips could have a hard time competing against AMD's Zen 4 parts in SIMD workloads since AMD is bringing AVX-512 with these upcoming CPUs.

With heavily vectorised SIMD workloads – RPL cannot beat ADL by more than 4-6% and thus generally even lose to the AVX512-enabled RKL with just 16-threads (vs. 32T on RPL). This shows just how much AVX512 can help despite the extra power required – and here it is hugely missed.

However, AMD’s Zen3 (5900X) with less threads (24T) but 12 big cores (vs. 8C + 16c) still beats RPL by a decent margin and this is not great news for Intel. With AMD’s forthcoming Zen4 supporting AVX512, RPL is likely to be severely beaten into dust – by perhaps as much as 2x (100%). Intel will, again, have to rely on non-SIMD workloads/benchmarks (Cinebench?) to show performance leadership.