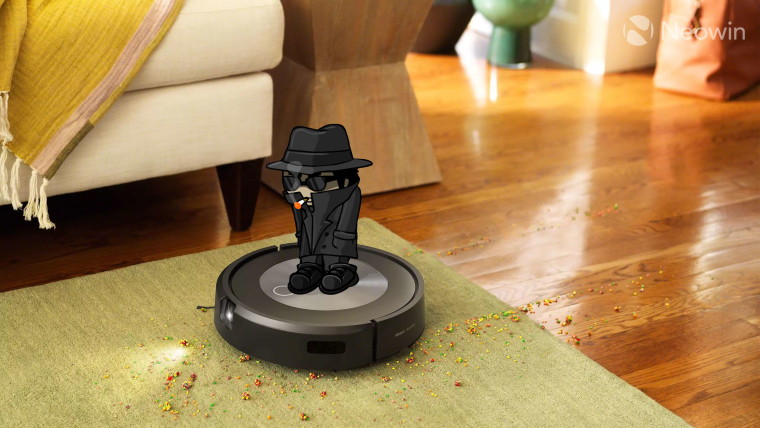 As we reported on a few days ago, Amazon is attempting to purchase iRobot, the maker of the Roomba robot vacuum cleaner, for $1.7Bn. This is four years after spending $1Bn to acquire the video doorbell company, Ring. As happens every time a big company acquires technology with sensors, publications and forum posts are rife with "Amazon is trying to spy on us!" messages. We saw the same thing when Microsoft released the Kinect on the Xbox One. While anything is possible, and the headlines do grab attention, a little critical thinking debunks this latest round of fear mongering.

At Medium.com, an author stirs things up by saying, "There wouldn’t be a way to tell if your home’s floor plan might still be saved on some police officer’s computer after accessed." In most cases, the blueprints for your home are already on file with the city, so the police department would presumably be able to access them if needed. In addition, floorplans are often posted online when a house is up for sale and this information is easily accessible online. Why would Amazon spend $1.7B just to give away floorplans to the local police?

The author goes on to say, "and this data might just be perfect to see when you’re turning your guest bedroom into a nursery or what decor colors you’d be more inclined to buy." A story by Yahoo! News says the same:

They don't buy a Roomba to have a little robot inside of your house spying on the layout of your home and whether or not you have a crib in your house or whether or not there are pet toys and a pet bed in a room of your house. So then it can funnel that information to Amazon, and Amazon can push whatever dog-toy ads to you the next time you log on.

Guess what? They can already guess that information based on your previous purchases and search history. This is a technology that's been around for a long time. Remember the pregnant teen that shopped at Target a decade ago? Knowing the layout of your house doesn't help Amazon at all with targeted marketing.

Do you have an Amazon Echo with a camera? Do you use Amazon Photos? If so, they can already literally see inside your house with better fidelity than a light detection and range (LiDAR) map provides.

Anther article called out the fact that Amazon would be able to figure out your daily schedule based on the Roomba utilization. While that also may be true, many companies can already do that based on your phone location, which I believe has a much greater probability of being correct since (and I have no data to support this, other than the utilization of my Neabot NoMo Q11) I suspect many run their robot vacuums in the middle of the night while they're sleeping).

So in essence, every article about spying comes down to the following use cases:

So are there any non-Orwellian reasons that Amazon is interested in purchasing iRobot? Definitely.

First of all, iRobot is an established brand and has over 50% of the robot vacuum cleaner market. Since Amazon sells products, this is a great way to get a bigger piece of the pie from this market. Amazon could easily rank their own product higher in the search results compared to their competitors, thus making more money from sales.

Second, iRobot utilizes AWS services heavily. The two partnered in 2016 to write a Case Study that describes some of the AWS technologies in use at iRobot. Since Amazon runs all of AWS, there are large operational savings to be had, which again results in more profit for Amazon.

Third, iRobot has strong Artificial Intelligence (AI) and Machine Learning (ML) technology in its stack. The company started off, and continued making robots for the United States government until 2016, so this is something I can definitely see Amazon wanting to own and to perhaps move into some of its other products in unique, interesting ways. At the very least, maybe they'll license their anti-pooptastrophe technology to competitors, thus making some money on every robot sale regardless of vendor.

Finally, Amazon clearly has an interest in the smart home ecosystem and wants to control it all, with the Amazon Echo as its central hub. While this could arguably be a big benefit for customers, there are also concerns with one company owning so much of the ecosystem and infrastructure.

The only real concern from this acquisition is the growing monopoly that Amazon and other tech giants are establishing, so let's not mix the messages up with baseless fear mongering.

To the people who are worried that Amazon is spying on you through your Roomba: There is nothing useful the devices will garner about you that the company doesn't already know. There isn't any practical financial application for the floorplan of your house, and Amazon is not in the business of responding to law enforcement (even though it legally will), so take off the tin-foil hat.

Plus, anything Amazon can do to help avoid a pooptastrophe is good for the world.