Facebook unveiled an update to their Safety Center earlier today. This comes shortly after Facebook's decision to not implement a 'panic button' on their pages, instead opting to forward reports of abuse to the Child Exploitation and Online Protection centre. This section of the site serves as a quick reference guide on dealing with online safety concerns for young users of Facebook, their parents, and law enforcement officials alike. 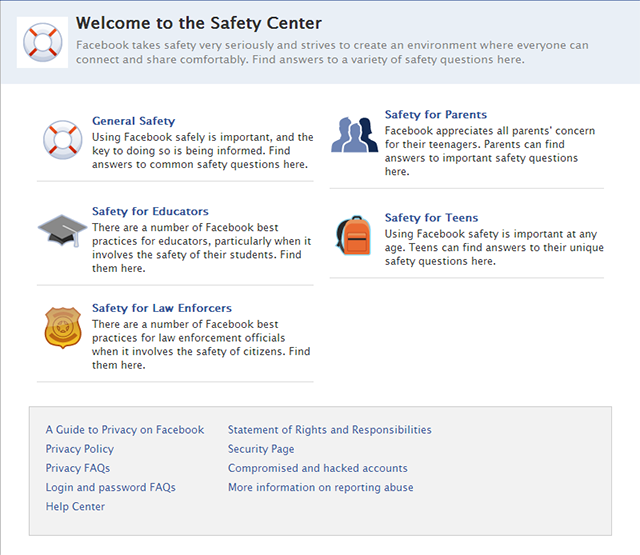 The Safety Center is divided into several categories. Within each category, the sections are divided into three groups: general safety information, responding to unwanted contact, and reporting objectionable content. The "General Safety" section encompasses most of the information listed in the other categories, the latter of which is tailored to specific Facebook user groups.

The "safety for teens" section contains mostly the same content as the general section, but has been tailored to teens in such a matter that makes it easy for them to relate with understand. The "safety for parents" section has three additional groups of information, advising parents on dealing with Facebook age restrictions, privacy for minors, and some advice from Common Sense Media. Finally, "Safety for Law Enforcers" assists law enforcement officials with reporting suspected sex offenders and terrorist activity on Facebook.

While most tech-savvy users may find little need of this information, in addition to last year's privacy controls update, Facebook remains committed to protecting the privacy and safety of its users on one of the most frequented websites in the United States.