Recent years have brought much discussion in the tech community about the prospect of flexible displays and devices that can be curled, bent or even rolled up. Trawl back through the Neowin archives, and as far back as 2004, you'll find articles predicting that such devices might soon become the norm.

More recently, we've seen companies showing off their visions of how this technology might eventually come to market, such as the striking HumanForm concept from Nokia. As recently as January of this year, Samsung used Windows Phone to showcase its Youm flexible display technology, although the company stopped short of revealing when such devices might finally go on sale.

The latest vision of how flexible handsets might evolve has been developed by researchers at Queen's University in Ontario, Canada. Yesterday, at the ACM CHI 2013 conference in Paris, an event dedicated to how humans interact with computers, Queen's researchers showed off their prototype, MorePhone.

The name is a play on the words "morph" and "phone", and a reference to the device's shape-changing capabilities. Unlike most other concepts showcasing flexible form factors, which can be physically manipulated into different shapes or configurations, the MorePhone changes shape all on its own.

The device uses a thin, flexible electrophoretic display, created by the British company Plastic Logic. Beneath the display lies a network of "shape memory alloy wires", which are the key to how the phone is able to change its shape. Users can define the parameters of the handset's shape-shifting; for example, the top-left corner could curl up to indicate the arrival of a text message, while the bottom-right corner could signal a new email, while the whole device could be set to curl inward to signify an incoming voice call. 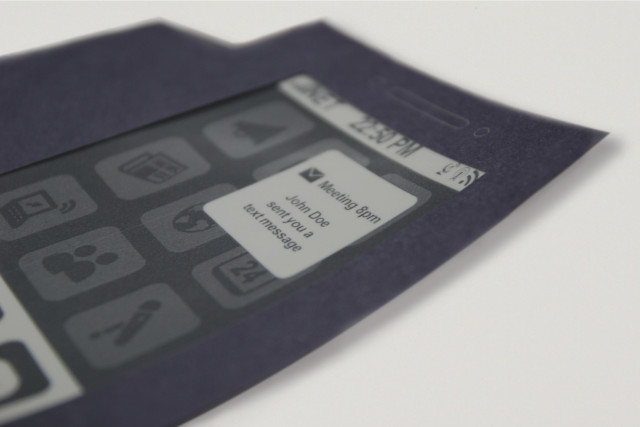 Dr Roel Vertegaal of the Queen's School of Computing, and principal developer of the prototype, explained: "One of the problems with current silent forms of notification is that users often miss notifications when not holding their phone. With MorePhone, they can leave their smartphone on the table and observe visual shape changes when someone is trying to contact them."

When you see the prototype in action in the video below, it's clear that it really is at the prototype stage and far from being ready for production. But Dr Vertegaal believes that many of us could finally be carrying shape-changing devices like the MorePhone in as little as five years. That's a future worth looking forward to.

Source and images: Queen's University, Ontario, Canada | Thanks to DPW for the tip!