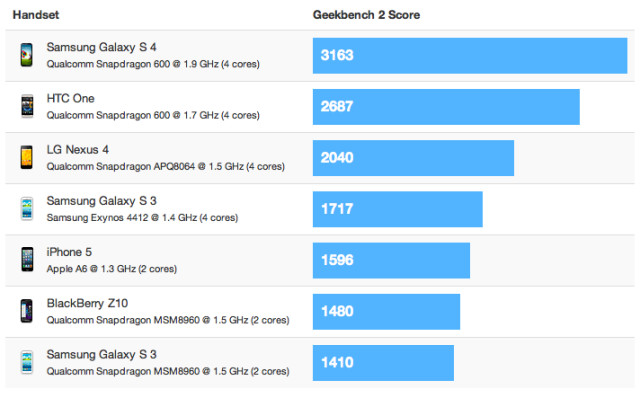 Less than a week after the unveiling of the Galaxy S4, the new Android superphone has already been subjected to the rigorous testing of Geekbench 2.

The newly announced Galaxy S4, which is set to be available to consumers in April, scored a 3,163 on the standard Geekbench 2 speed test, not far from double the iPhone 5's score of 1,596. The S4's score also far exceeded the HTC One, Nexus 4 and the previous iteration of the device, the Galaxy S3.

The "eight core" claim associated with the international S4 version is a little misleading though. Whilst the Exynos 5 Octa chip technically holds eight distinct cores, the "big.LITTLE" arrangement created by ARM holds two processors that engage depending on the needs of user-performed tasks - one high-powered quad-core Cortex-A15 running at at 1.2GHz and one quad-core Cortex-A7 running at 1.6GHz.