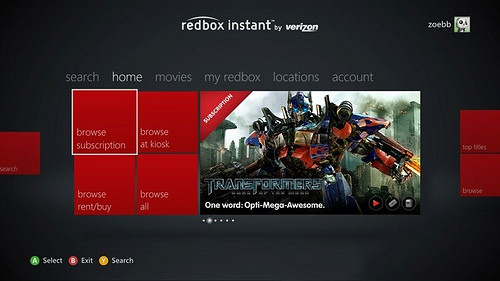 In February, Microsoft announced that it would have the game console exclusive for Redbox Instant by Verizon, the new streaming video service that's designed to rival Netflix and other companies in that space. While select Xbox 360 owners got to test a beta version for the past few weeks, today the Redbox Instant app is now publicly available.

Microsoft's Major Nelson website has the details on the Redbox Instant Xbox 360 app, which also ties into the Redbox DVD and Blu-Ray disc kiosks that are all over the US. The subscription price for the app is $8 a month which also adds four one day credits a month for renting DVD discs from those kiosks. The price goes up to $9 a month for Blu-Ray dics rentals. Redbox Instant allows people to rent or purchase downloadable movies without signing up for a monthly subscription.

Microsoft also announced today the addition of the GameTrailers Xbox 360 app, which offers up trailers and video reviews of games along with original shows such as Seedlings, which is set in the Minecraft universe.