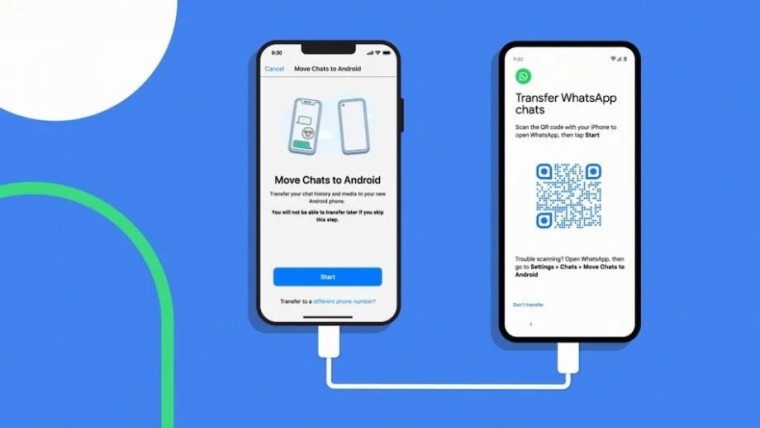 WhatsApp's users wanting to transfer their chat history from an Apple iPhone to an Android smartphone, and vice versa, will finally be able to do so. Meta, the instant-messaging app’s parent company, has removed any and all remaining hurdles or limitations that have hindered the process in the past.

The majority of Android smartphone users who owned a Samsung-branded device had the ability to pull all their WhatsApp data from an iPhone. But the facility is now available to Android smartphones made by other companies.

WhatsApp posted a Tweet from its official Twitter handle confirming the ability to transfer chat history from an Apple iPhone to an Android smartphone, and vice versa. The app is promising users “the freedom to switch to and from your preferred devices.”:

A new way to keep the chats that mean the most 📱📲 Today, you’ll have the ability to transfer your entire chat history from Android to iOS and vice versa. Now you have the freedom to switch to and from your preferred devices.

Transferring an entire WhatsApp chat history has never been an easy or straightforward process. Similarly, moving other personal information from an iPhone to an Android smartphone wasn’t simple, either. However, Apple has a Move to iOS app on the Google Play Store, and Google has a Switch to Android app on the Apple App Store.

WhatsApp is relying heavily on the Move to iOS app to transfer the chat history from an Android smartphone to an iPhone. The process involves downloading the app on the Android smartphone and then following the on-screen instructions that appear on the source and destination devices. Once the data has been transferred, users can open WhatsApp on the target iPhone and log in using the same phone number they used on the Android device.

It is important to note that the Move to iOS app will be able to move only personal messages. It won’t be able to transfer peer-to-peer payment messages. Additionally, the transferred data does not immediately go to or via any cloud storage.