We've seen plenty of customised games consoles over the years - and we've usually stared in jealousy at those who get to own them - but there's something pretty special about the latest one to come out, so to speak.

The 'PS4 GayStation Edition' - or 'GayStation 4', if you prefer - is a Sony PlayStation 4 with a striking rainbow paint-job, and you'll get no prizes for guessing that, in the words of those who created it, "this is for the gaymers". The one-off console was designed for the Stockholm Pride Festival, and auctioned by Swedish tech retailer Webhallen. 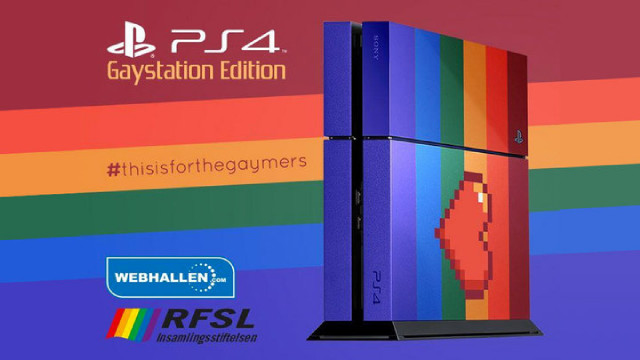 Every penny of the proceeds from the auction is being donated to RFSL Newcomers, a charity that supports lesbian, gay, bisexual and transgender refugees and migrants "who have fled persecution based on sexual orientation, gender identity or gender expression". Four thousand bucks is certainly some serious money for a console, but since it was for such a good cause, it's great to see that so much was raised.

Frankly, if it was a bit closer to our budgets, we wouldn't mind buying a PS4 or Xbox One with that fabulous paint-job ourselves. Sony, Microsoft - we're ready when you are.