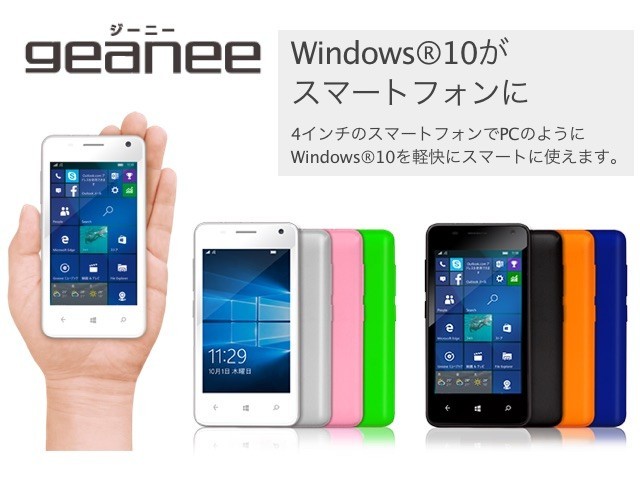 Over recent months we have seen a magnitude of manufacturers preparing for Windows 10 Mobile, announcing handsets designed for the upcoming operating system. Japanese handset manufacturer Geanee has revealed their latest budget device, set to arrive this fall alongside Windows 10 Mobile. The Geanee WPJ40-10 will initially release exclusively in Japan, and be a low-price entry into the Windows 10 Mobile ecosystem.

Currently scheduled to cost Y12,800 ($105), the WPJ40-10 will come in a compact form, with a small 4-inch display sporting a 800x480 resolution. The device will be powered by a currently undisclosed low-end processor and 1GB RAM, and store up to 8GB of data on the handset with the option of expandable storage over microSD. While the phone won’t find use in high quality photo shoots, a 2MP front-facing camera, and a 5MP rear camera can be found onboard. As with many Windows Mobile handsets, a range of vibrant back casings will be offered, with a black or white bezel around the phone’s display.

In the near future, we can expect to see a wide range of devices arrive on the market, alongside the public release of Windows 10 Mobile. Japanese manufacturers have recently showcased a range of handsets, in anticipation for Windows 10 Mobile's official arrival. Currently, the operating system is still in preview, with the most recent build having released Thursday.