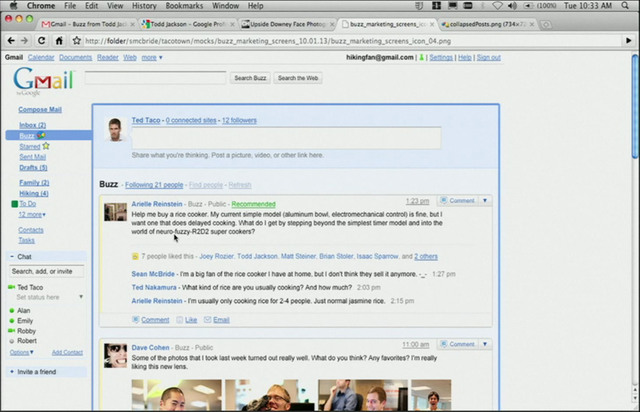 Today in a live press event, Google announced Google Buzz. They're calling it "a new way to share." It is launching today and will continue rolling out over the next few days. Google notes that this is not a finished product. They are continuoulsy pushing it to integrate with more and more services. Buzz will also launch as an enterprise product and "will change the way businesses communicate."

Here are the 5 key features of Buzz:

The audience asked questions regarding privacy and functionality. Google stressed the importance of privacy as being a key reason in adding in the ability to decide who can see what. This also holds true of your Buzz profile. You will be able to select what you want showing on there as well. Future Google Wave integration was hinted to as well. Things such as real-time Buzz updates were derived from Wave technology.

As of now, there will not be any Facebook integration. Tweets can be pulled into Buzz, but not the other way around. However, this could become possible in the future. It was also noted that Buzzes, like Tweets, will show up in real-time on Google search (assuming the Buzz is public) and will not be given any sort of pagerank preference.