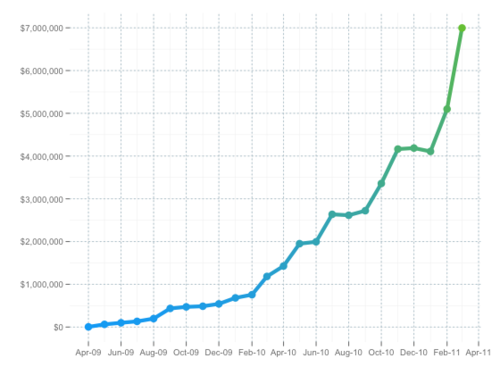 Today marks the second birthday for the fundraising site Kickstarter. It’s been a few weeks since we’ve done a proper Kickstarter Week in Review segment, but we figured it’d be a good idea to see how the previous projects we’ve reported on have been fairing. In addition, we’ll take a brief look at some interesting financial facts about the site.

For those of you who may be unaware, Kickstarter is a site that gives people with product ideas a place to pitch their offerings to people who want to donate to their cause. While donators aren’t investing in the idea, they are given rewards for their generosity. The site started exactly two years ago with a modest goal: Free people from mindless fundraising so they can concentrate on their actual ideas instead. Kickstarter is apparently resonating with people as the graph above displays the number of dollars pledged per month and it has obviously been increasing by leaps and bounds.  While film and music projects dominate the funding, technology sits in the middle and has received $1.7M in pledges over the past two years.

We’ve covered many technology related projects over the past few weeks, so let’s see how they’ve been doing.

Ubertooth One – Open Source Bluetooth Scanner: This project needed only $16,384 to fund, but turned out to be extremely popular bringing in 441 pledges with a combined funding of $53,001. Based on the current updates, it appears that backers will be receiving their very own Bluetooth tester in the near future.

FreedomBox Foundation: This project was fully funded by the time we covered it. With a goal of $60,000, they managed to raise $86,724.

Wüdskins – Bamboo and Aluminum iPad Case: It looks like people appreciate natural cases for their tablets since this project attracted 103 backers for $10,755, slightly over the target.

Minecraft Documentary: Not only did this project receive $210,297 in funding, but it also placed third in the Kickstarter Hall of Fame. Minecraft, FTW!

Museum of Art and Digital Entertainment: The project to open up a computer museum in California successfully raised $21,329. They’re currently working on getting the gifts out to the 306 people who supported the project.

The Future of Facebook: Kickstarter users like their film and documentaries, as this one raised $6,737 to easily beat the funding goal of $5,000

Hanfree: An iPad stand: This project has been fully funded, having 256 pledges totally $17,627. In addition, there’s still time to back it yourself: The project runs for another 11 days.

WALdok: Speaker/Charger for iPhone/iPods: This project was extremely popular, bringing in 760 backers totally $76,491 in pledges. There have been many updates, and they’re looking for older iPod devices for their testing.

Dam It Game for iPad: This tablet game had a modest goal of $1,500 and was able to find 22 backers willing to pledge a total of $2,280 so that the game will see the light of day.

GoPano iPhone Lens: Since more people are using their phones as cameras nowadays, it only makes sense that the GoPano project would not only meet, but demolish its funding goal of $20,000. It currently has raised $117,485 and still has over two weeks to go.

The Cosmonaut - A Wide-Grip Stylus for Touch Screens: Although some people questioned the need for yet another stylus, nearly 6,200 want one of these and pledged $134,236 to receive one.

The Keyglove Input Device: Controlling your computer with a glove appears to be popular. Needing $10,000 for funding, 95 backers pledged $12,474 in order to see the project come to fruition.

Desktop Trebuchet: Who doesn’t like a little medieval warfare? The project doubled the required $48,000 so now 1,876 people will be attacking their coworkers with desktop sized siege weapons.

Joystickers – Gaming Buttons for Touch Screens: This project had a lot of positive feedback and managed to attract 116 pledges. Unfortunately the creator needed $25,000 and only managed to receive $7,179 meaning the project fell short of the goal and was canceled.

The Bluetooth Game Gripper: Another accessory to make gaming easier on your phone, this project also failed to meet its $30,000 goal, attracting 251 backers for a total of only $12,935.

Paintball Robot: If you want your very own paintball firing remote control robot, it looks like you’ll have to design one yourself because this project received less than 10% of its funding goal of $15,000.

Vegetarian Cookbook for your iPhone: It seems that iPhone users like meat, as Celia Brooks Brown was only able to raise $1,993 off of 23 backers when she needed $18,500.

Meglio: Handle and stand for the iPad: This project had a goal of $15,000, but was only able to convince 86 backers to pledge a total of $4,122 towards the goal and therefore was not successfully funded. That said, the company is still moving forward and are actually selling the device for the first generation iPad on their newly created website!

In closing, it appears that technology-related projects are fairly popular, with 14 of the 19 projects we've covered making their funding goals. Be sure to keep an eye out for future projects that we will cover. You may find something that you'd like to contribute to yourself!