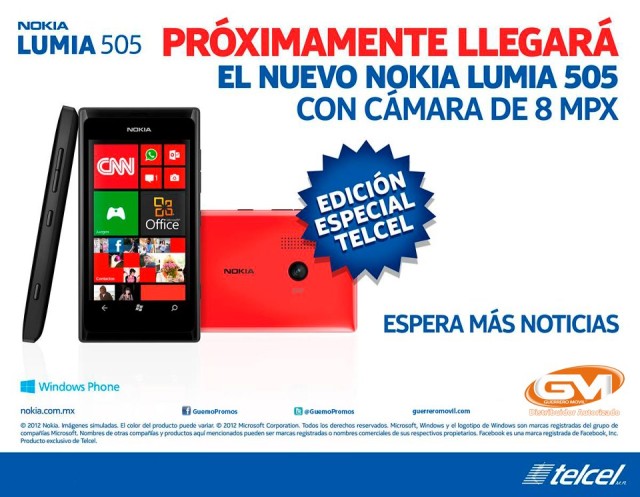 In November, wireless providers in India started selling the Nokia Lumia 510, the newest (and very low-priced) member of Nokia's Windows Phone 7.5/7.8 family of smartphones. Now a wireless carrier in Mexico has apparently outed a similar version, with the Nokia Lumia 505 brand name.

The Facebook page of Guerrero Móvil has posted an image of the previously unannounced smartphone, which will be sold in Mexico by Telcel. In addition, WinP.cn has posted word that a device with the Lumia 505 name has passed certification by the Wi-Fi Alliance.

It's likely that the features of the Lumia 505 could be similar to the Lumia 510, which has a four inch display, a Qualcomm Snapdragon S1 processor, 256 MB RAM, 4GB of on-board storage, and a five megapixel camera.

There's no word on pricing yet for this new Lumia 505 variant, but we expect it to be in the very low price range like its Lumia 510 cousin. Microsoft and Nokia have said in the past that they want their Windows Phone products to expand outside the normal smartphone market, which is typically composed of higher-end devices with higher prices.

We expect that Nokia will make the full and official reveal of the Lumia 505 any day now, along with its availability and final price point.