HP originally unveiled its new flagship-class Windows 10 Mobile device, the Elite x3, way back in February at Mobile World Congress. Now, at long last, the device has started shipping in the UK.

The company opened pre-orders for the device earlier this month, priced at £706.80. The Microsoft Store also began accepting pre-orders a week earlier for £749, but later reduced its price to match that of HP.com. The price includes not just the Elite x3 itself, but also the Desk Dock accessory, allowing owners to use a mouse and keyboard with the phone when connected to a larger display.

The handset's UK launch has come a little later than planned. Microsoft originally said that it would be available on August 18, before delaying its release date to August 22, and then pushing that date back again to September. Meanwhile, HP has been promising delivery "in 5-10 working days" for almost three weeks.

But now, HP has dropped the pre-order tag, allowing buyers to order the Elite x3 for immediate shipping. The company is promising "delivery within 48 hours", adding that "the majority of orders placed before 4.00pm are delivered next working day". However, HP.com warns that there is only limited stock available to buy now.

The device is also available to order immediately on the Microsoft Store. The Elite x3 listing there no longer displays a 'pre-order' button, allowing buyers to add the device to their cart... 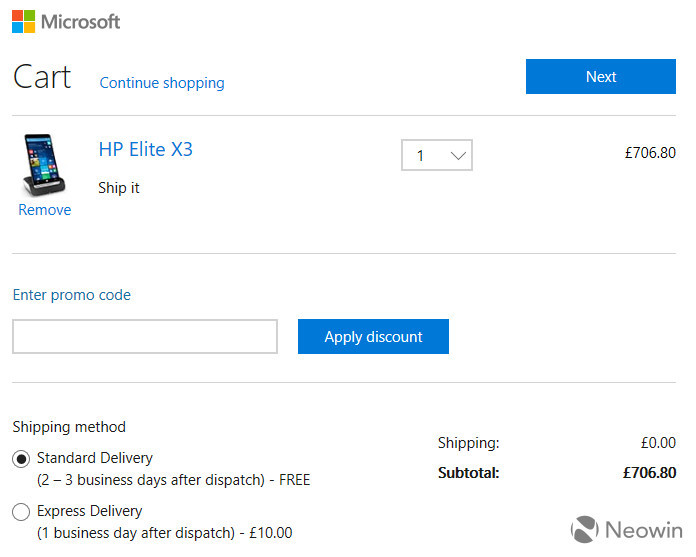 ...and proceed to checkout, either with free delivery in 2-3 days, or next business day delivery for an extra £10.

Here's a reminder of the Elite x3's key specs:

You can find out about HP's official accessories for the Elite x3 here, including their prices.

Bear in mind that the Elite x3 ships with an older version of Windows 10 Mobile onboard, but it will be upgraded to the latest Anniversary Update "on or about September 13, 2016".