The first of the tests we ran the browsers through was the SunSpider JavaScript benchmark, testing each individual browsers performance. The tests were performed with each browser running on its own, in a default state, measuring the time it takes for the browser to run the test.

Mozilla Firefox 3.6 was the slowest of the browsers, taking an average of 2574ms to complete the test, Safari 5 finished the test in 451ms, Google Chrome completed the task in 423ms and Opera took 381ms to complete. Internet Explorer 9 took a total of 898ms to complete the SunSpider JavaScript task in the speed test, the second worst rending time. 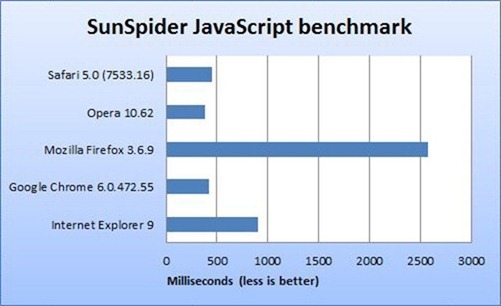 After testing the SunSpider JavaScript benchmark for each browser, we tested the performance test for the flying browser icons, setup by Microsoft. The test of 100 images shows how many frames per second the browser can keep up with during the animation. The more frames per second is better. Safari 5 had an average of 5fps during the test, Mozilla Firefox 3.6 managed 9fps, while Google Chrome 6 had an average of 23fps and Opera with 21fps. Internet Explorer 9 managed to output 60fps during the test. 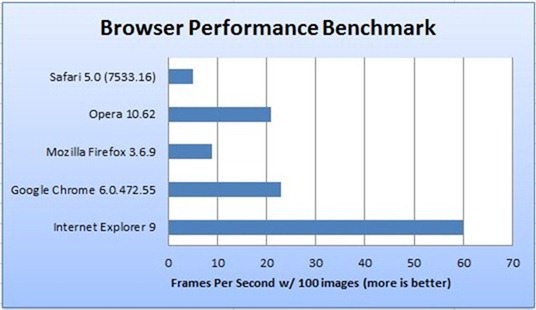 The second test used 256 images on screen at the same time, with Safari 5 still coming out the worst with 1fps, Firefox 3.6 following closely behind with 8fps, Opera averaged 14fps with Chrome just ahead with 15fps. Internet Explorer 9 managed to output 33fps in the test, outperforming all of the other browsers. 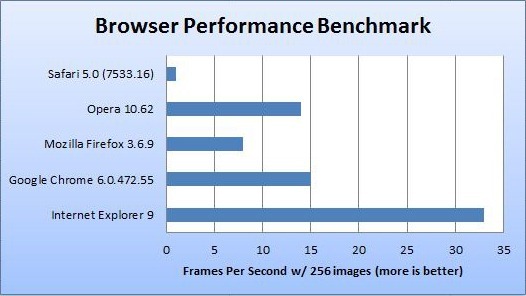 Neowin also put all the browsers up to the Acid 3 rendering, a Web Standard Performance test that measures how well a browser displays selected web elements, related to the Document Object Model (DOM) and JavaScript.

Note: the above tests may vary from PC with different hardware and operating systems. The tests were performed on all stable release browsers as of this date.