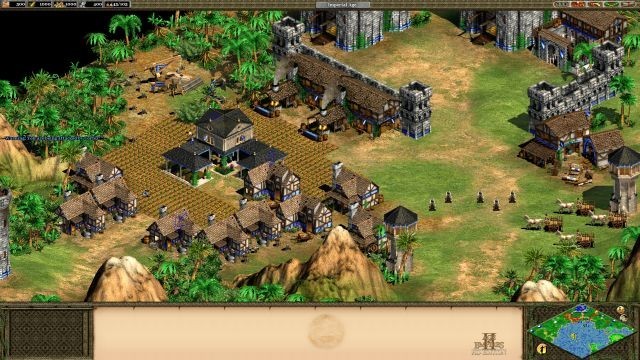 Microsoft may have shut down Ensemble Studios, the creators of the Age of Empires series of RTS games, several years ago, but the company is still trying to provide content for the vast number of fans of the game franchise. It launched a free-to-play game, Age of Empires Online, in 2011 but recently announced it would no longer add new content to the game.

However, this week Microsoft launched Age of Empires II HD on Steam. It's a graphical remake of the 1999 game, combined with its expansion pack The Conquerors, while also adding new Steam Workshop features and new multiplayer options. The game is already highly successful; it's currently the top selling game on Steam.

We got a chance to ask Microsoft's Ryan Chaply, who is in charge of the Age of Empires franchise at the company, some questions about Age of Empires II HD, which was developed by Hidden Path Entertainment.

First, how did the idea come about to revamp Age of Empires II in terms of its graphics?

This was definitely a community driven project, after releasing Age of Empires 3 on Steam last year, we saw a huge groundswell of people asking for AOE II. Due to the age of the code and lack of an official multiplayer service, we determined that a much more thorough overhaul would be ideal. Fortunately, working with Hidden Path allowed us to do just that.

How did Hidden Path get the gig to develop Age of Empires II HD?

One of the developers at Hidden Path had been on the project at Ensemble when the game was originally created and had expressed interest in making the game properly work on Windows 7.The goals between HPE and Microsoft ended up aligning nicely, and we decided that it would be in our best interest to do a much bigger revamp of the title.

Was anyone else from Ensemble consulted on the development of Age of Empires II HD?

You’ll actually see a couple of names in the credits three separate times. We did really luck out with Hidden Path; they had a lot of insight into the code with several team members having created the original game.

How hard was it to bring the graphics up to what PC gamers expect for playing the game on their large screen monitors with higher resolutions?

Surprisingly challenging, but I really can’t say it better than our devs have in a number of the developer diaries at www.ageofempires.com/news.html. It was a surprisingly tricky project, a lot has changed in the last decade!

Was there any attempt to perhaps fix some long standing bugs in the original game for the revamp?

There were a few crashes that were resolved from the original, but we didn’t want to change anything unless necessary in order to preserve the gameplay. We actually had a computer at Hidden Path running the original game for comparative evaluation, if they noticed something that might be a gameplay quirk, they’d go replicate it on the original. If it was there, it stayed in. It’s funny how some bugs people end up wanting to keep or bring back memories. I still remember getting in a rock on Halo PC, and exploring outside of the map with a ghost. For nostalgia, it’s the little things.

The game will be released on Steam and will include support for Steam Workshop. Can you go into more detail on how that will work for mod and level editor creators?

I actually did a dev diary personally on that one, you can check it out at ageofempires.com/news.html. Long story short, we’re allowing for quite a bit of customization there with the files, and there are some incredible things already appearing on the workshop. Some 500 mods have been put up there already, varying from texture replacements to custom map packs, new sounds, and much more!

What can you tell us about the multiplayer support for Age of Empires II HD?

There was a lot of nostalgia for the Zone, but that’s not something we were able to bring back. Fortunately the Steam platform provides many features that the Zone never had, and we’re utilizing quite a bit when it comes to what Steam offers! I know the ability to invite friends adds a ton for me, especially for things like clan matches and saved games.

What other features do you think are important in this revamp?

There really aren’t any features that are not important to the game that we’ve worked on. I think the updated rendering engine is going to see a lot of very cool things with the workshop over time and constitutes one of the biggest efforts with the game. A ton of under the hood stuff has been tweaked too in order to get the game running on new machines that will hopefully keep it relevant for years to come.

Any plans to launch a free demo for Age of Empires II HD?

Since this is a nostalgic title, there’s a lot of content out there people can already experience with Age of Empires, so it doesn’t really make sense to bring out a demo for the game. Steam does allow some things to help expand reach that we might explore down the road.

Let me catch my breath a bit here lol. Microsoft is a huge company so I can’t really comment on anything outside of the AOE team here. There’s a lot of love for the franchise here though! Working with old code is a very tricky proposition, and we did get lucky with Hidden Path since they had some knowledge of the project that we didn’t even have. It always depends on the customers though, with AOE II there was a huge amount of passion and love for the game and in the end that was enough to make this a reality.

Finally, we know that Age of Empires Online is no longer adding new content. Is there a chance we could see an all new Age of Empires/Age of Mythology game in the future?

My focus right now is squarely on getting Age of Empires II: HD up and running. I don’t know what the future will bring, but here at Microsoft we are notorious with the line of Microsoft does not comment on rumor or speculation.

We would like to thank Ryan for answering our questions.