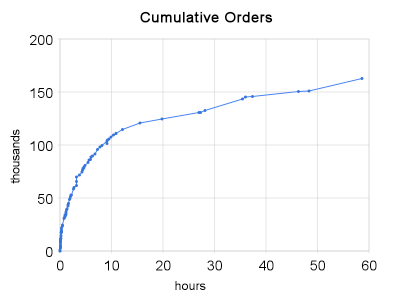 It doesn’t matter if you love the iPad or not, one thing for certain is that Steve Jobs built up the hype and we will all soon know if the product lived up to its stature.  According to Daniel Tello, the iPad looks to have sold about 150,000 units in the first 72 hours.

While this is speculation, he has shown to be reliably accurate in the past so there is some merit behind his analysis.  The predicted sales are "based off of tracking order numbers submitted by volunteers at Investor Village's AAPL Sanity board".

These sales in comparison to other launches (if accurate) dwarf those of the Nexus One at approximately 60,000 units but the iPhone 3G was able to hit 1 million sales in the first three days.

The iPad has started a flurry of competitor tablets, while its unknown if HP kicked out the Slate at CES to beat Apple to the punch; other manufactures have begun to jump on the tablet based computer rush.  While 2009 may have been the year of the netbook, 2010 may be the year of the tablet.