Next week Microsoft is set to show off Windows 8 and all that they have been working on. One thing we know is that Microsoft will be working with third parties to create apps for its new platform.

Knowing this, it looks like AccuWeather might be among the first to offer up an app for the Windows 8 platform. Considering that Windows tablets are in the minority, it is skinned similar to Metro, and only appeared recently, we could be looking at one of the first full screen Windows 8 apps. 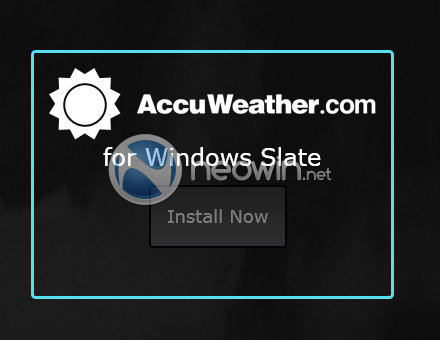 The application is built on Silverlight and you can download and install it right now, although the location appears to be stuck on New York. With Microsoft right around the corner from showing off its new platform, you can be sure it has worked with third parties to make sure there are plenty of applications on launch.

The application is straight forward and is clearly designed to be finger friendly. While it says “for demonstration only” across the bottom, the application does work.

This could be an early look into the world of Windows 8 applications. We are likely to learn a lot more next week at BUILD.

Thanks for the tip rfirth!