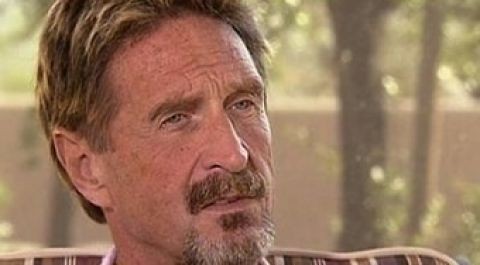 John McAfee has sure had his share of legal troubles this year. Back in May, he was arrested following a raid where authorities apparently found drug manufacturing and weapons. Then in November, Mr. McAfee allegedly shot and killed his neighbor, leading to a month-long manhunt for the founder of McAfee, the company most well known for its antivirus software.

After the murder, John McAfee built a blog announcing his innocence and explaining that the whole situation is a setup by the police in Belize. Last night, a post on the site indicated that John was arrested on the border of Belize and Mexico, but no other details are currently available. The timing is curious, as it comes the same day as CNN published portions of an exclusive interview with the man.

The whole situation could make quite an interesting movie. For example, one story says that McAfee donated $100,000 worth of equipment to the San Pedro police department, but somewhere along the way, someone inserted a bag of cocaine into one of the boxes. This gave the police the ability to go to his house and confiscate another $80,000 worth of equipment.

Reading his account of events, it sure does sound like he’s being framed. On the other hand, how many guilty people admit their guilt? Regardless, the next few days should be interesting.

UPDATE: It appears that the story of John McAfee has taken another twist. His official blog reports that he is, indeed, still safe and that the person arrested was his "double," a person they were trying to use as a decoy to get McAfee out of the country. This whole story is becoming very surreal.

We are not in Belize, but not quite out of the woods yet.  I will do a more detailed posting later today if all goes well.  My “double”, carrying on a North Korean passport under my name, was in fact detained in Mexico for pre-planned misbehavior, but due to indifference on the part of authorities was evicted from the jail and was unable to serve his intended purpose in our exit plan.  He is now safely out of Mexico.

(Thanks to member Haggis for the tip!)