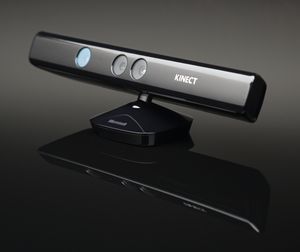 Microsoft has now released the first major update to the Kinect for Windows SDK since both the developer tools and the hardware itself were launched in February.  The 1.5 version of the SDK contains a number of new additions and features for Windows 7 developers who want to create applications that will work on the Kinect motion sensing hardware.

One of the new features is Kinect Studio, which allows developers to record and play back Kinect data, which should allow software makers to cut down on their development time. Another new feature is the ability to add face tracking to Kinect-based software, with support for keeping track of the position of the head, the location of a person's eyebrows and the shape of a mouth.

Skeletal tracking for people in a sitting position is now available in the 1.5 Kinect SDK which now supports a 10-joint head/shoulders/arms skeleton. The voice recognition software now accepts four more languages in the SDK update: French, Spanish, Italian, and Japanese.

In addition to the new version of the SDK, Microsoft has announced that the Kinect for Windows hardware is now on sale in more countries, including Hong Kong, Korea, Singapore, and Taiwan. In June, Microsoft will expand the sales of Kinect for Windows in even more countries such as Austria, Belgium, Brazil, Denmark, Finland, India, the Netherlands, Norway, Portugal, Russia, Saudi Arabia, South Africa, Sweden, Switzerland and the United Arab Emirate.