Ubisoft may be trying to replicate EA's success with subscription programs with a service of its own, as some users had discovered a listing on the Ubisoft Store named Ubisoft Pass Premium that hints at something of the sort.

Although the placeholder product has now been wiped, it was found on a newly setup "Ubisoft Subscription" section of the store, making it less likely to be a case of product mislabeling. No other information about Ubisoft Pass Premium was uncovered from the page other than the name. 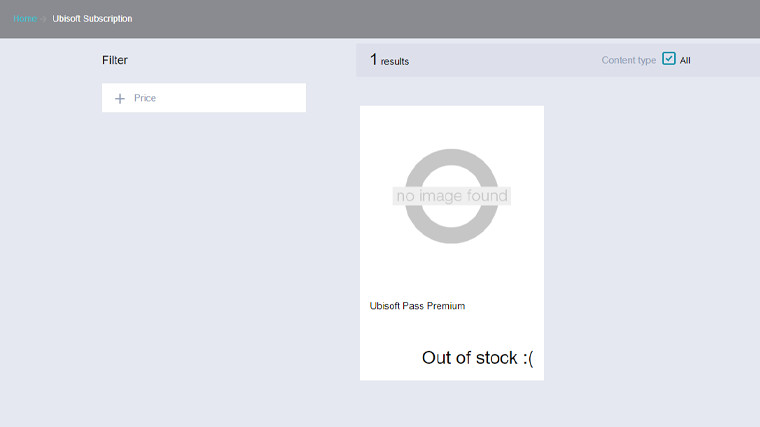 However, assuming this is a subscription service, the Premium label at the end could be implying there will be two tiers available. This practice will be familiar to Origin Access users, the EA monthly subscription service on PC has a $4.99 standard as well as a $14.99 Premier tier, with the latter offering unlimited access to brand new titles from the publisher even before their release dates.

As such, if Ubisoft takes this route, we could see a standard Ubisoft Pass offering older games by the company like Rainbow Six Siege and Ghost Recon Wildlands - among all its classic releases - while Premium bundles up much newer and upcoming titles such as Anno 1800, The Division 2, and Ghost Recon Breakpoint.

With Ubisoft's focus on 'games as a service' titles for some time now, this venture could be a good fit for the company. Still, we have to wait until an official announcement by Ubisoft to confirm any of this. If there is an announcement coming, Ubisoft's E3 2019 presentation would be a good place to keep an eye on.